he ONLY medal an officer is NOT entitled to 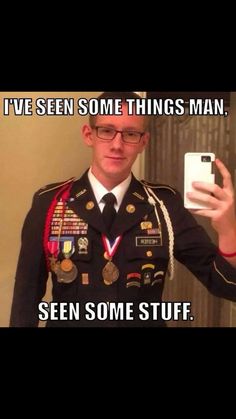 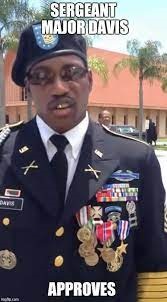 I live in the Communist State of Connecticut and we have an actual Communist US Senator, Dick Da Nang Blumenthal, who was caught falsely claiming he served in Vietnam when he never left the states. He apologized and cried and in typical Connecticut fashioned the Commie liberals have voted him in for years. Most likely will be re-elected again this year. Should have had some jail time

Seems par for the course. We seem to have a lot of elected officials who get caught with bold-faced, embarrassing lies; but they just keep getting re-elected.

The only medal a Commissioned Officer can’t “earn” is a Good Conduct Medal. Former enlisted who earned them may still wear them (some of us even have small bronze stars on ours).

How about Jessie “The Body” Ventura (James Janos)?
He was never a member of a SEAL team (he was UDT), and never served a day in combat, even though the title of one of his books is: “I Ain’ Got Time to Bleed”.

For a real capper in the uncool department, he sued the family of Chris Kyle after Chris has been murdered.

You’re quite a guy Jesse.

Jesse The Bogus Ventura a real class A POS for sure. And ain’t his blood type.

To all, wear what you have earned! A false claim is but a denial of not having the balls to serve!
For myself, it was about serving my country, protecting my countrymen and being there for my brothers! Many of whom never came home! To me it’s not about what could be pinned on my chest, but what lies inside - my heart! I live each day as best I can, with integrity and honesty, remembering those I lost. That’s enough for me. No glory needed, no mention of fame, just the honor of serving with my brothers!

never served a day in combat, even though the title of one of his books is: “I Ain’ Got Time to Bleed”.

“I ain’t got time to bleed” is his famous line from Predator. It has nothing to do with his military service, it has to do with acting / wrestling.

It is part and parcel of the sham combat veteran he pretends to be.
In his book he writes something about a Purple Heart being a marksmanship badge for the enemy…as if he would know anything about combat.

Pretty good article here about that phony:
Was Jesse Ventura a SEAL or a UDT guy? | San Diego Reader

I don’t feel any obligation to defend Ventura. Just wanted to make sure we understood that “Ain’t got time to bleed” is a cultural reference.

In most cases, and I have my own family history as a guide, those who served, especially those who served our great Nation during WW1, WW2, Korea, Vietnam, Afghanistan, Iraq, Gulf, etc., etc. usually DON’T talk about it, certainly never brag about it, and if pushed to talk about it, say very little. Most Men who saw a lot of combat and lived to talk about it, don’t want to relive the horror of seeing their buddies killed or anyone else killed. My father served in the Korean War- never discussed it, my uncle- my fathers younger brother served in Vietnam- lost nearly his entire battalion and he too, never talked about it. My uncles served in WW1 & WW2. In the Second World War I had one uncle from Pennsylvania that was awarded the Medal Of Honor, another that was awarded a Silver Star. Purple Heart list his leg in battle, and numerous other medals and honors. Some never came home. Not one of them ever wanted to talk about it. Following my great family military service history, I too served, fortunately during a non wartime period- just missing the Vietnam War, serving in the United States Navy- mid 70’s to early 80’s Honorable Discharge. I had a great job serving in Naval Intelligence, was a member of the Commissioning Crew (Plank Owner) of the USS DWIGHT D. EISENHOWER CVN69 - commissioned on October 18, 1976. It was an awesome experience. Roughly 6,000 men, over 100 aircraft. And as my father and uncles before me, I rarely, if ever discussed what I did… not because of combat fortunately, but due to the sensitive nature of my job and my responsibilities. To all my veteran friends out there, and all the active service members in uniform today… Thank you. Thank you for all your sacrifices and your hard work and dedication to helping keep all of the citizens of the United States and civilians all over the world safe. We are the greatest Nation of Earth. It’s truly sad when a few don’t understand the magnitude of the hurt they cause by misrepresenting who they are and lying to the American people for monetary gain. It’s a disgrace and slap in the face to every man and woman that has served our great nation or is serving right now- may you find peace, tranquility and safety each and everyday and come home to your families when your service time is done, and know that each and everyone of you is greatly appreciated, loved and respected beyond words. For me personally this is what matters most. Phonies are a dime a dozen as the saying goes. But those of us that really served or are serving our great Nation today, are priceless. My utmost thanks and gratitude to all those serving today… helping to keep all of us safe and secure in our homes.

I still have my class A army uniform in my closit,but have never put it on since I took it off in 65 at Travis AFB in Ca. when required i do show my VA card at restaurants that require proof you are a VET

VA card at restaurants that require proof you are a VET

In Utah we can have a Veteran Endorsement put on our drivers license.

After spending 15 years in uniform, the easiest way to tell a faker is if they are wearing a uniform in a place you wouldn’t expect. Why? Because those of us who did wear the uniform know that you strip off the uniform as soon as you possibly can and get into civvies.

Places you may see REAL Servicemembers in uniform (outside of Military facilities) may be airports, schools (recruiters mainly)m or announced Military-related events. If you ever have any doubt about whether someone is real or a poser, simply ask to see their Military ID Card (aka CAC). It is regulation (at least in the Army) that when in uniform, Soldiers have their CAC on their person. If the person in question is retired or simply a Veteran, s/he should have either a Retired ID (usually blue), or a Veterans Administration (VA) ID Card.

Other things to look out for are people wearing rank that they are too young for. Also too many skill/qual badges. While there are those who have done a lot in their careers, most Servicemembers are not going to have all of the “rare” qual badges, tabs, etc. Mixing service badges is another tip-off (yes, there are those who have service in two or more services, but each service limits the badges earned from other services that can be worn). Wearing Officer and Enlisted rank and insignia at the same time is a dead giveaway too. If the person cannot identify ribbons they are wearing is yet another tell. Wearing ribbons and medals at the same time is not done unless the person JUST came out of a formation that awarded him/her that medal.

At the end of the day, remember that those who have been there, done that don’t have to advertise. Quiet Professionals/Secret Squirrel personnel don’t advertise either (except for the Rangers; they will let you know they are Rangers). So that guy wearing a Navy SEAL T-Shirt probably isn’t. Have you ever heard anyone bragging about being “Delta Force” (SFOD-D) or Special Missions? Not likely. If you have, it’s been a poser.

Same in Florida. All you have to do is present your DD-214 or VA ID Card, and it is on your Driver License. You can even get Veteran License Plates. There is a special one for 100% Disabled Veterans. You have to show your VA Disability Determination letter for that.

I just show my VA card it is always on me and my concealed the VA care in with my drivers license,i don,t have a SS card,lost that in the Monsoon N Vietnam,but know it by heart,and never applied for a new one,never really needed one since i am not on Medicaid ,I am 100% disability so don’t need it,the VA takes care of me, what is ironic it that I grew up to NOT give any one my SS# because it was my special # and now every where you go they want your complete # in order to just about to do any thing. my conceal carry is in a special place tho show the LEO

That’s because we have a lazy electorate. People tend to just vote for a name they recognize, or just whomever is in office at the time. Back in the late 80s, the statistic was that 88% of incumbents won re-election because of lazy voters.

I’ve “split the ticket” in some elections because I researched who I was going to vote for; whether the person believed in and voted for the same things I believe in. I vote based upon history (how the candidate voted in the past) and effectiveness. A little research goes a long way.

Agree with everything you said. Honestly, when we get down to some local elections, I don’t even understand why they have political parties listed. What do I care if the dog-catcher is a Republican or Democrat? The fact that local politicians have to align with a national party might be a symptom of a greater illness in this country.