the survival of democracy in Europe is the biggest issue

Yes, but this issue has little to do with Ukraine, if you look at recent examples of abuse.
Ultimately, the issue of Russian domination over Europe is an economic one. Euro zone is stagnant because of their bureaucracy, taxation, and Socialism. How do you fix this? I have no idea. Let them fall on hard times, and grow some hard men.
Beliefs like “absolutely must/must not…” are how WW I happened. I hope we are wiser now.

World War One happened because all the European leaders wanted a war. It was only a matter of time until something happened to give them an excuse to fight.

World War Two happened because Europe was afraid to fight and let the Tyrant of the moment grow too strong before standing up to him. That’s much what we’re doing now.

And it almost feels like Putin is trying to make a broader European conflict (special military operation!) inevitable.

Which is why the west needs to shut him DOWN and shut him OUT of Ukraine.

Which is why the west needs to shut him DOWN

As a mental experiment, suppose this is impossible. Like it leads to global nuclear war, or combined economic power of the West is insufficient to overcome Russian resources, or it is impossible to keep West in coalition long enough. For whatever reason, impossible. What next?

@Alexander8, well, first of all, let’s do a reality check:

So your question is not based on present factual evidence. But ok, if all your premises come true, which I find very unlikely, the next step will the that Russia will occupy Ukraine. Russia will then be isolated from the rest of the world, including global energy markets. Eventually, Russia either collapses into smaller, less-predictable states, as did the Soviet Union, or they preemptively attack a major European city with nuclear weapons and blackmail the world with the rest of their nukes unless they reestablish economic and diplomatic relations and provide aid.

Really pretty similar to what Germany did after an unbalanced end to WWI, but this time with nukes instead of Nazis.

But I do not think that is what will happen. The vastly overwhelming economic and military power of the west puts Russia in a very bad position. Choking Europe of gas supplies and sending tsunamis throughout global energy markets is only going to steel the resolve of the aligned west.

Putin is crazy, but he’s not stupid. He knows he’s effectively losing the war in Ukraine (GDP of $156B, one-tenth that of Russia!), at least compared with his initial objective. He also knows the west (and I’m sure he’s been told this with utter clarity) will continue to pour superior weapons into Ukraine.

This ends when he’s achieved a debatable military victory he can wave in front of his forced-adoring public and he occupies far Eastern Ukraine.

And then it turns into a stalemate war in which Ukraine continues to westernize and chips away at Russian occupied territories.

And so the mess will just continue for decades.

Which is why…the west cannot let Putin win this.

I believe it will be one of the former Soviet republics. Azerbaijan is energy–rich, promised delivery to Europe, is an ally to Turkey. Nice target for blackmail.

Germany turned evil without turning savage. Recall the Kennedy kids were charmed when they visited, they hosted Olympic games etc. Today, with the example of NoKo, there is certain temptation for Moscow to say “you don’t treat us like human beings, we won’t act like ones”.

What do you make of this report?
Clearly, if Russia receives these “volunteers” (mercenaries for food), their ability to recruit own soldiers is exhausted. This also may be China’s way to respond to recent visit of US delegation to Taiwan. 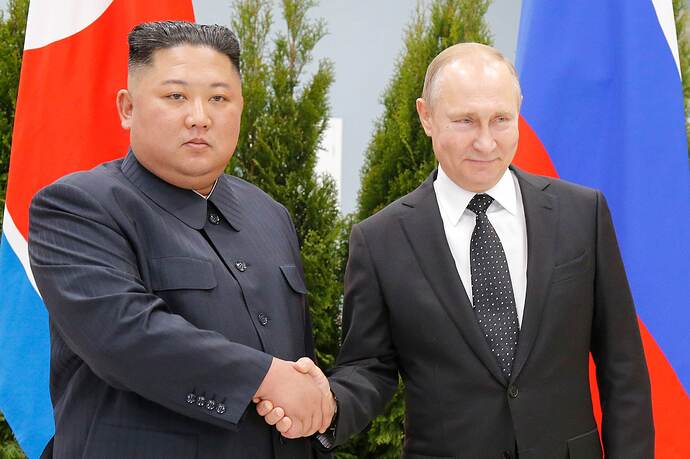 Russian President Vladimir Putin is reportedly resorting to North Korean dictator Kim Jonh Un for military assistance in his invasion of Ukraine. North Korea has agreed to send 100,000 soldiers to aid Russia in its war against Ukraine, according to...

I don’t understand why people are supporting Ukraine (the country). Zelenski is a dictator and only better than Putin in that he didn’t strike first. He’s banned opposition parties in the government, taken control of TV and turned into a state-run media, etc… I feel for the people caught in the middle, but not the country as a whole.

To understand it you will have to either live there or be in the center of War Zone.

I look at this a little differently… and to be honest I lost my hope that people who live their nice and peaceful everyday life will ever understand it.
I’m also starting to be such person. I lived almost like Ukrainians for over 20 years. Now another 20 years passed by with freedom in my heart…
I can understand but I’m happy I’m not a part of that old life anymore.
What I can do is support them and pray… and avoid listening misinformation on medias.

Speaking of mis/information. Russians promised to release a report on biolab activities before US midterms. So far, all their allegations were bs, as far as I understand. Lets see if they can dig up anything real.
During WW2 Soviets and Nazis has museums exposing each other’s crimes.

their ability to recruit own soldiers is exhausted

I think the main issue for Russia is that they are only allowed to use their conscripted soldiers on foreign soil under a formal declaration of war. Since this is just a “special operation” they are limited to career soldiers and conscripts who are willing to “volunteer”.

It makes sense to arm foreign fighters and farm out the fighting to them. Not entirely dissimilar from the US’s current strategy of apposing Russia in Ukraine. There is less dissent and anti war sentiment when it is someone else’s young soldiers getting killed.

issue for Russia … a formal declaration

You think that Russia, Soviet or neo-imperial, concerns itself with formalities of international law? In 2014 they annexed Crimea and said they had no troops there, and didnt know whose green uniforms were taking over everything there.
Special Military Operation only means they wont cross boundaries that get Moscow nuked.

It is my understanding that it is Russian law that says they can’t use the conscripts unless war is officially declared. As a pseudo elected official, Putin needs to at least pretend to follow their own laws. There seemed to be some significant complaining early on when Russians found out that conscripts were being tricked and/or forced into volunteering to fight in Ukraine.

Even dictatorships can only push their people so far.

Russia withdrew from inspections of its nuclear arsenals. Am I paranoid, or is it the thing to do if they want to deploy some stuff from cold storage to frontline depots?

I suspect it is more an exorcise in taking their ball and going home since they don’t like how we are playing. Something along the lines of “If you keep supplying our enemies then we are going to stop cooperating and allowing your inspectors in our country”.

It is also likely a bit of nuclear saber rattling as well.