People must understand that everybody has right to be free and independent. Single person, tribe, nation… If the freedom is taken, especially in Eastern Europe… I’m against it.

So I STAND WITH UKRAINE.

Additionally, Ukraine literally aided the Nazis in WW II. It is quite well documented.

Man, you have to chill out.
What pills did you take recently?

Part of my Family was threatened and insulted by Ukrainians that time… so I have some knowledge about it.

But you are acting like people who recently took down US Presidents monuments… because they were all slaveowners.

Different times, different circumstances… wrong thinking like yours brings wrong judgment and nothing else than problems…
Do your homework and learn true history. I can’t forbid you posting anything but remember - at this Community we try NOT to glorify any bull$hit.

I understand fully.
Ukraine is not my problem.
At the end of the day, ukraine put up with a coup by the obama administration. They sat by while ukraine became the most corrupt country on earth. Im not a dummy. I am ex.
I fully know ukraine’s history. I fully know what thia war is. I fully know why it is happening. Ive escorted bodies of my friends…from war zones where america didnt belong. And we dont belong in ukraine.
It is a terri le situation, but it is not my problem. And i wont let it become my proble.
I have ukranian froends and neighbors. They say the same thing. When you allow politicians to be lawless, lawlwss shot happens.
As for monuments in America, to compare me to radical leftists is the most ignorant thing you can do. I am the opposite of them…interesting side note, it is the left in america who want us in the war in ukraine, not we educated conservatives.

Pills? Insulting those you are begging for help is a losing proposition brother

If Ukraine is not your problem, why you show such hate to it? If you don’t want to stand with Ukraine, just say so. You are accusing the country of being something that they are not. History is a past. You cannot mix WWII times with today’s. It’s not the same.

It is not out War, and we don’t need it. I don’t understand, why are you acting like we already sent troops there to fight and die for other Country? So far we are not.
Actually I’m glad that US soldiers are assigned to Poland, near the border with Ukraine. This keeps people feel safe there.

Don’t look at that conflict that we are for Ukraine. We are there against Russia.
You also need to remember, that every war or conflict we are involved to is about the money, influence and resources. So there might be the other purpose to be involved, but nobody want to talk about it… 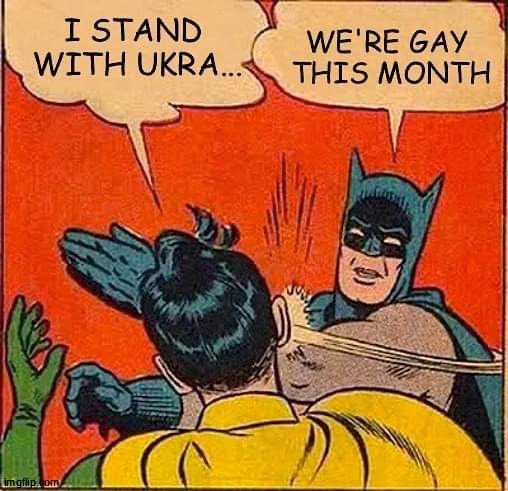 That made me laugh.

Ukraine is the most corrupt country on planet earth.
Zelenskyy has outlawed all parties contrary to his. It is a giant joke.

Even if Zelenskyy was the most corrupt person on Earth, Ukraine still wouldn’t deserve to get conquered.

In the beginning I stood with Ukraine, but I don’t stand with Brandon’s bank. That’s what Ukraine is!
Trump would NEVER have stood for Putins invasion! In this era, no country should be conquered, however what are we doing to stop our own conquering invasion?
Taiwan is next! That’s cause all the strength we exhibit from the White House! NOT!
Maybe Trump should take him up on that back of the school challenge!

I don’t care anymore what people post here.
I hope you never experience even 1% of suffering caused by this war. This thread supposed to show support for people and the families who fight Russian regime off, as the topic says: “Stand With Ukraine”… but looks many people who knows Ukraine from the map got a lot to say against.
The truth is, that we cannot keep our own Country in good shape but are wiling to criticize other Nations…

Dont mistake my statement “it is not my problem” for a lack of sympathy and/or empathy. The catastrophe there is just that. But it was planned. And it was planned by the regime currently in the whitehouse.
No one can argue as to the level of corruption in ukraine. There are 10,000 articles about the corruption there.
As for misery, im a combat vet brother. Im fully aware ofnthe misery caused by war-and i dont wish it upon anyone, anywhere. I do however pay a huge amount of taxes and expect that money to be used to better america…not to be used to enrich tyrants, oligarchs, or arms dealers…and expecially not to line the pockeys of politicians from either side of the aisle.

As I’ve said before, we must support Ukraine. Otherwise, Europe is next, and then the United States.

Ukrainian democracy is imperfect - just like all the other democracies.

I accept that the 2019 elections in Ukraine were free and fair (International observers say Ukrainian election was free and fair) and that Zelensky is the legitimate leader.

I also accept that some parties, mostly heavily pro-Russia parties, are non-grata in Ukraine. While not in keeping with our acceptance of all political parties in the US (with the exception of the McCarthy era), it is what the leaders (not only Zelensky) of Ukraine felt was needed in the face of the Russian threat.

The day the west stops helping Ukraine beat back the Russians is the day we invite aggression against democratically elected governments the world over by the likes of Russia and China.

We simply have no good choice but to support them.

Ukraine is corrupt, yes. They know that. They elected Zelenskyy to try and clean it up. Putin is putting an end to that.

South Korea was corrupt. Brutal too. So was Taiwan. Look at them now. There is hope for Ukraine. Unless we let Russia take them over.

Ukraine and Russia committed mutual atrocities. At this point I am not sure if a decent person can stand by either of them. Russia is clearly a vengeful adversary, bitter at the loss of Soviet empire, red banners on their tanks and WW2 drum beating betray it. The question on my mind, if this enemy rises, will it defeat future NWO tyranny.

Like Poland during and after WWII, Ukraine is now Russia’s best bet to be a gateway into the heart of Europe.

It would be an unmitigated disaster if Putin had a foothold there. Quite simply, the entire world would be (already is) at risk.

Putin is shutting off gas supplies to Europe. Does anyone really think he would stop at that if he had Ukraine. Putin wants to rebuild the Soviet empire, nothing less!

Ukraine, as corrupt as it may be, absolutely must not fall to Russia. There is so much more at stake. We’ll deal with the corruption later. Right now the survival of democracy in Europe is the biggest issue. (We have our own issues with the survival of Democracy in the US!)

Which is why I started this post… Stand with Ukraine!