Watch the video in this part and you would be shocked! Democrats has to go! Trump must win or the China will take over USA! Read on!

We have exclusive breaking news that changes the trajectory of the upcoming US election. Because we speak Mandarin Chinese, we have been able to hear the correct Chinese description of what's on Hunter Biden's hard drives which were turned over to...

Every hour closer to Election Day we are going to find more and more crazy news.

To be honest I stopped to believe in any revelations long time ago. Less stress, longer life

Watch the video in it!

Something maybe fishy about this shocking news is why would the communist China really wanted Biden to win, and sabotage it all before the election? China maybe up to something?

It has been known long time ago that China prefers USA to be liberal Nation. Who wants strong and armed Country next to his own?..

And it’s not about Biden only…

We need to research the sites reporting these things before we take them at face value. Naturalnews .com has a less than stellar reputation. I cannot attest to that reputation being deserved or not. I do believe Hunter is the kind of guy that would have serious questionable things on a laptop. And most things he has done I would believe. But not with just that one site. That is just me.

So…lemme get this straight. Hunter Biden takes his laptop across the country, hands in in to a random BLIND tech (who says he didn’t see who actually turned said laptop in), who then illegally copies the hard drives, sits on them for a while, then hands them over to Rudi Giuliani, who was warned by the FBI that he was being subjected to a Russian disinformation campaign, oh, and Hunter never comes after the laptop, even after a year, and this is all totally legit.
Drink more Kool-Aid, and it’ll all make sense. Also keep in mind this is the same crap Trump* got impeached for already.
Maybe keep politics out of this place? It’s hard enough being a responsible gun owner/carrier without spreading lubricous conspiracy theories whipped up by a panicked administration trying desperately to stay out of prison for their crimes.
Or, would you rather talk about how Trump* wants to take your guns and worry about due process later? This was an actual recording, too, so there’s video evidence. Then, after that, we can talk about the 220,000 dead Americans that died because Trump* ‘likes to downplay’ a virus he KNEW was 5 times deadlier than the flu. He knew in February, but went golfing and held rallies instead of, you know, doing something about it. Again, actual recordings exist.
Feelings are very high on both sides right now, so how about we stick to guns, and leave the politics for FB and YT?

I’m not advertising, but I just posted a thread on the topic of news, or if you like, “a free press” with reliable news sources. After long debate I chose to try the thread, because of how critical it is for a democracy to have real and accurate information for the public to base decisions, and votes on.

Nobody believes stories they don’t like any more because they are just so commonly faked, or, are so misreported as to bear no resemblance to the real when, what , where, and why.

If we want a strong country, and an informed public, we really need to raise a fuss about this news problem we have !!!

I agree, suspicious, but, you can’t suggest leaving politics out of this place, and then treat everyone to a heavy dose of loathing political monologue of your own.

Edit: Unreliable news is a huge problem for this country right now, on both sides.

Why the Politics make the people so angry? Is it worthy to create another nonproductive discussion here?
Do not allow one “crazy news” sabotage the Forum… Is it really so hard to get over it?

If we already have had this article here… please just comment this article, not other Community members.

Just want to say I have a lot of respect for most of the folks here. Lot of church people, people on the same page as I, some in the same book, even some on the same shelf oddly enough. Learned a thing or two, thanks

but, you can’t suggest leaving politics out of this place, and then treat everyone to a heavy dose of loathing political monologue of your own.

That is very true. My heavy dose of politics was meant as an example, to the end that if we devote our time in these forums to politics, we won’t be talking about firearms in general, and concealed carry in particular. Personally, I get so much political overload on the internet, that I come here to avoid it, and to talk about guns, holsters, concealed carry techniques and styles, etc.
By now, 2 weeks prior to the actual election, I’m pretty sure that the vast majority of voters have made up their minds. So my request is let’s just not beat on that here. Please.

Yes, it is the choice of each individual as to whom they vote for. Honestly, I’m just so overly tired of politics everywhere you turn, that when it popped up here, well, as I mentioned in another reply, I come here to get away from politics, and talk about one of my favorite subjects, firearms, and all the variety that comes with that subject. So many different choices, so many different ways to carry, one in the chamber or not, OWB, IWB, chest rig, shoulder rig, so much to talk about, and yet politics rears its ugly head even here.
Rather than bring up and discuss something that has divided our nation so badly, all I’m asking is let’s stay on a topic we all can enjoy discussing, and no one is going to get upset about, and indeed, is the very reason this forum exists: Guns.

@Richard306 I can agree with that desire. I wish politics didn’t matter, but it profoundly affects gun rights and self defense. so I don’t know how to get around it completely. But I sure wish I could. I like the new thread about mutual respect. That can help a lot. In fact I can respect your response here, which is the heartening thing about this place, I find it easy to end up respecting most here.

I voted already. Nothing anyone can say will change that nor will the reasons I voted the way I did be dented or tarnished. I believe in the 2 amendment, the First Amendment as well as the rest. The only right I put above those two was the right to life. Debate over.

I am interested in LTC or CCW and have been for a number of years. I believe my reason for that interest is based on self protection, and sport like enjoyment. I believe we have all the laws we need now to have a reasonably armed citizenry. I see absolutely no reason to ban semi Automatic AK 47 or AR15s from law abiding citizens and consider anyone trying to abridge that right given us in the constitution and confirmed by the Supreme Court anti gun. However there isn’t a lot of those discussions on the firing line at the gun club. I have a shirt that says Leave my Faith, my Family, my Firearms and Freedom alone. Respect that small request and we will not have a problem. And unless told otherwise I assume people at the club feel the same way.

The shirt? From what store? Gonna get one for myself!

I got mine at Tractor Supply Company. But I believe Amazon has some as well. 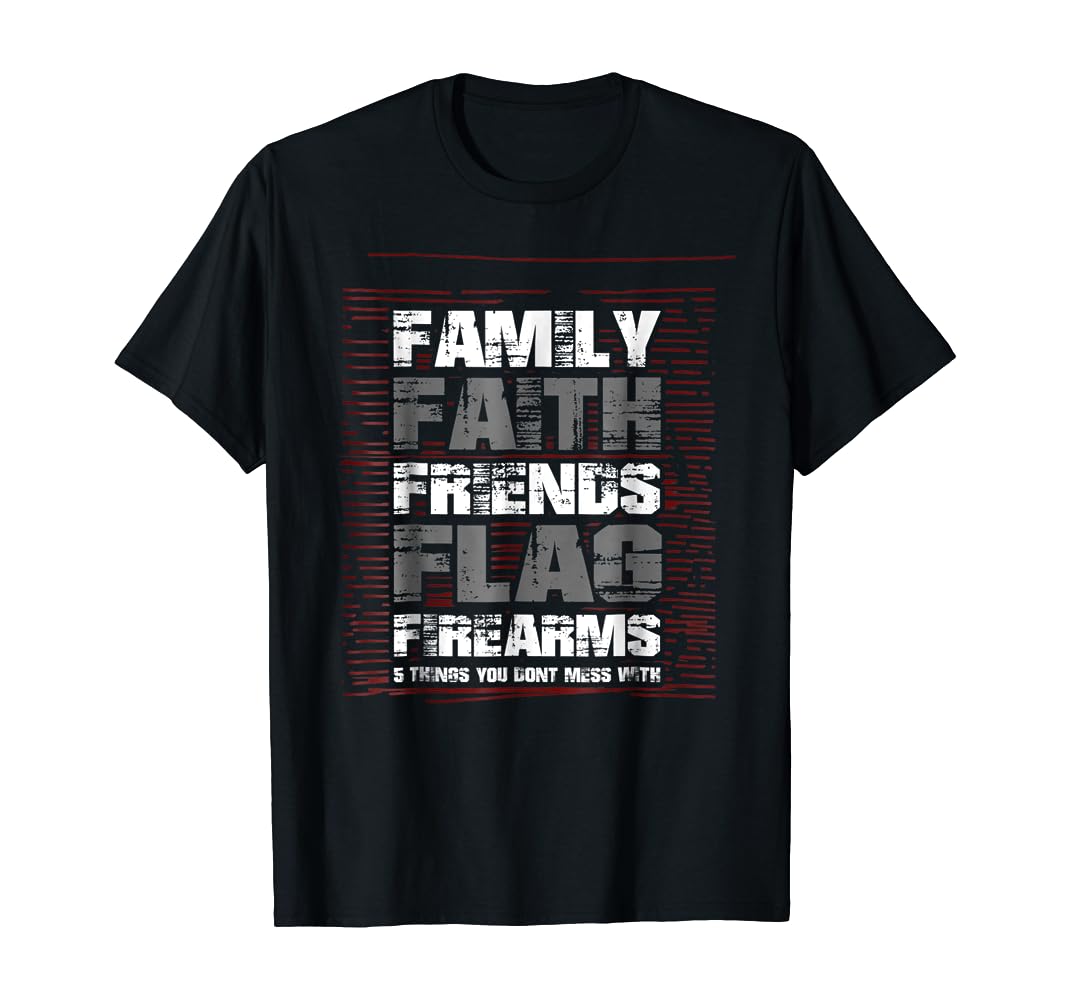