I removed my Shield 45 Striker (an awful experience for anyone who has done this. The 45 back plate is built differently than the other M&Ps and it’s a pain to get off).

I lightly cleaned everything. Everything looked fine, so I put it back together.

That being said, the rattle test is not working. When I push the striker block down and shake the slide, I do not hear a rattle.

the striker does move freely when I manually move it while holding the striker block down.

Is it possible that this striker just doesn’t rattle? Or is this a sign of a problem?

Hmmmm…never had a rattled striker… This part is always under little of spring tension or sits in the plastic cap.

never had a rattled striker

You’ve never had the rattle while holding down the striker block? I thought this was common practice, but I’m not sure if this is true for all striker fired guns. My other M&Ps do rattle, but this gun is also a 45 (not sure if that makes a difference). I’m also not sure if this is really an accurate test for all guns.

I have no idea if caliber matters. All my striker fired handguns are 9mm and none of them rattles from the striker…and the strikers barely move… at least they are not loose.

, wouldn’t be the first time!

To be honest I’ve never thought about rattled striker…
Whenever I clean this part the only test I’m doing is “pencil test”.

How would one perform this test

What’s insane is I know I’ve heard the test and read you can test the firing pin by holding the firing pin block down and shaking the slide… a rattle is a sign of clean chamber. But I cant find anything on it now

. Wonder if it was just internet mumbo jumbo.

Be careful…the pencil may fly far…

This is the only test I’ve been trusting.

This is the video I learned of the striker shake 18:08 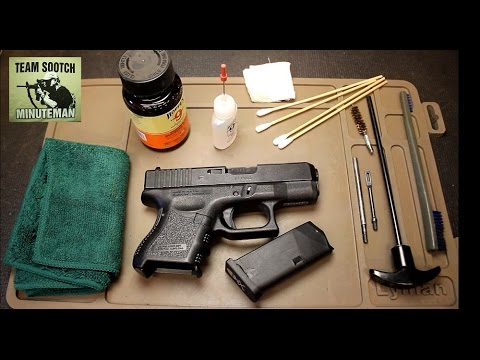 Great, now pencils will be on the NFA list

I’d like to take the striker out one more time and really get everything out, but the Shield .45 rear plate is absolutely insane to get off. I had to have an extra set of hands with pliers to get it off (@KillJoy) while I held the striker assembly back. For My other pistols this is an extremely easy process.

I wiped everything down with patches and cleared the channel out with a Q-tip. Put it all back together. So all should be fine. I’m just really obsessive about ensuring proper function from my self defense tools.

I really think if I try to get it out again, I may damage the striker assembly and the rear plate.

Remember to leave the striker channel DRY… so once you cleaned and lubed it, run Q-Tips several times to be sure all is dry.

And I’m wondering why you experiencing rear plate removal so hard. It works exactly same way as regular M&P and it’s so easy…
Perhaps there is something wrong with striker? Have you checked all parts? Nothing broken or missed?

And I’m wondering why you experiencing rear plate removal so hard. It works exactly same way as regular M&P and it’s so easy…
Perhaps there is something wrong with striker? Have you checked all parts? Nothing broken or missed?

From what I’ve read online, this is very normal for the Shield 45. It goes in at a very weird angle and it fits very tightly. It is not the same design as the other M&Ps. Most people end up using a screwdriver or a hammer to help out. This is my biggest complaint with the gun. I should be able to remove that plate easily for maintenance.

I also read the Shield 45 uses a unique striker block, so I wonder if that also plays a role in if I would get a rattle or not like other models.

It’s not a very popular gun these days. It was a big deal when it came out, but now there’s just not a lot information on it.

Seriously though, I bought the 45 shield as a fun back up carry gun, it’s a great shooter. I’m tempted to go back to 9mm every now and again, but most of my training has been with this Shield 45

. It’s easy to carry, and I shoot/ manipulate it well. Just wish I wasn’t OCD about this darn striker rattle

Be careful…the pencil may fly far…

This is the only test I’ve been trusting.

So I found out my M&P 9 also does not rattle… SOOOOooo I’m going to forget this Glock test and stick with the pencil test.

Both firearms past the pencil test.

Both firearms past the pencil test.