It’s been incredibly hard to watch. We owe an apology to all who’ve sacrificed and died to bring us to this point.
And an apology to our future generations. 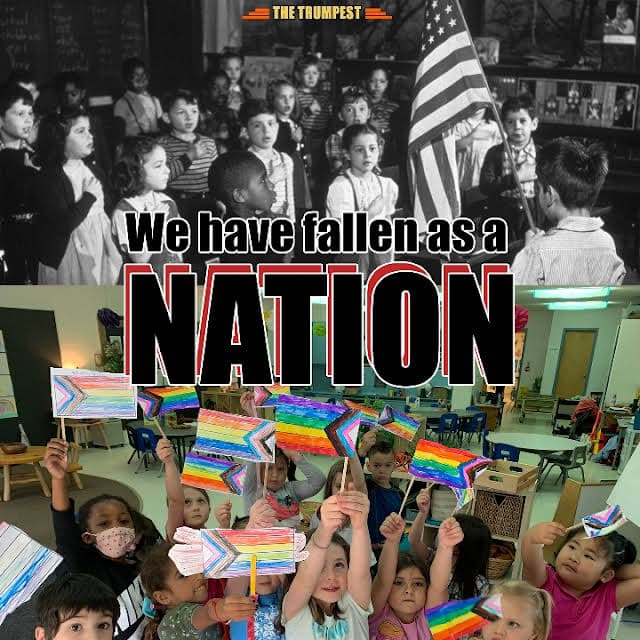 No it’s not sad it’s about equal rights some thing people have given their lives for. What is sad is if we live in a country where people are judged by their political affiliation, color, religion or sexual orientation.

No it’s not sad

Yeah. It is sad.
Liberty and justice for all is already covered with the American flag.

What the bottom picture represents is the subversion and mutilation of our children for politics
and money. I have finally tired of your sanctimonious drivel and have set you to ignore.
Please! Don’t bother. Or anyone else for that matter.

What the bottom picture represents is the subversion and mutilation of our children for politics
and money.

We have allowed the left to control our schools.
It has nothing to do with equality when filth is welcomed in classrooms.

It has nothing to do with equality

Exactly when we cater to a very small minority of Americans to the point we force feed our 2nd Graders their ideology we, as a nation, have failed.

when we cater to a very small minority of Americans

I wouldn’t use Americans in that sentence.

All of this politicizing does way more harm than good. I graduated from Clemson in 2021, and I can vouch that even “Gen Z” hates the fake virtue signaling around Queer/Trans rights and identity. So-called “Allies” are the problem here. They treat these labels like trendy hashtags and promote garbage like Drag Queen Story Hour, which opens the door for predators and perverts to shift the blame onto actual Queer folk when they go too far.

Meanwhile the Queer and especially Trans youth population (18-25) have the highest rates of homelessness, substance dependence, suicidality, sexual assault, and public violence in the country. I was homeless for a bit myself last year. There’s a reason I carry and it’s absolutely no one else’s business nor right to infringe on mine.

Don’t tread on me

Don’t tread on me

Don’t often get to hear a woman’s point of view. Thank you for being here!
We haven’t been tread on, someone backed over us again and again! As a United nation, we are, not!
Good luck out there, stay safe and watch your six.

opens the door for predators and perverts to shift the blame onto actual Queer folk when they go too far.

There’s a reason I carry and it’s absolutely no one else’s business nor right to infringe on mine.

I upvoted your post, but I wish I could double-upvote these specific ideas.
We’re seeing story after story of attention-seeking clowns going too far with their activism, and too often in schools. I know LGBTQ rights folks must cringe every time they see these, but they haven’t been able to distance themselves from the public perverts. They should fear the backlash, which will come when Momma Bear can’t take any more. And if I were among their number, I would absolutely be training at the range before that happens.

No… It’s sad. You bring politics into a context that does not warrant it. These are children - not political pawns to corrupt with the “flavor of the day”. If you live in the United States of America, you are free to say what you will. Children, however, need to be taught love for this great country and know how wonderful America really is. Just because someone is perverted doesn’t mean that they have a right to teach perversion to children.

Yes I very much agree with you. I was anti what ever you want to call it in the bottom picture for a long time. When we refer to this country I think of the people of this country and their freedom. We are not taking the freedom of the people in the top picture we we are giving it to the people in the second. I have become more compassionate. I think that is what will unite our country to make it stronger. I do not wish to take any ones freedom just giving my opinion. I am just exercising my first amendment right and respect everyone’s.

Edit- The soup guy from Seinfeld

and have set you to ignore.

Washington, Jefferson, JFK, Reagan, and MLK are rolling over in their graves to see the current devastation of our civilization and unique experiment with freedom. America’s state in the Biden Regime Era is just utterly disgusting.

Cheer up it will get worse before it gets better. Not trying to be a troll just saying.

Most of the comments l’m reading really disappoint me, as a veteran I served to to allow ALL Americans to be treated equally and be protected. As a gay man who grew up in the 60’s and has been attacked both physically, verbally, and emotionally you people have no idea what you’re talking about. No one is subverting or coercing anything. Teaching children to respect and treat those who are different is what needs to be done and judging by the comments in this thread we need to teach adults as well.