Over the years I’ve seen many ranges with cameras and a monitor out in the store. Many times no one watching the monitor.
Here’s one reason why live in person RSO’s are needed on ranges. 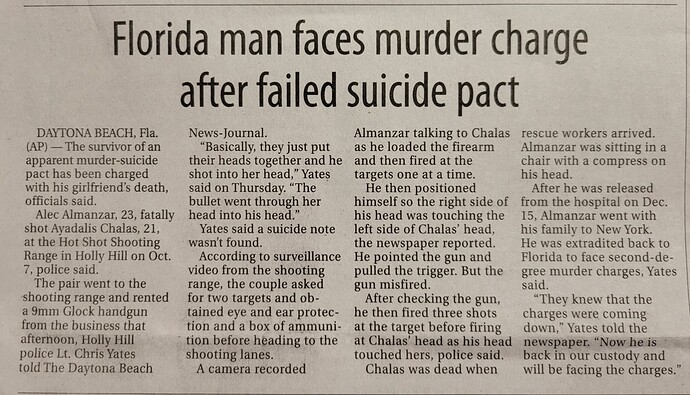 Not sure that an RSO would be able to stop most suicide attempts. Maybe in this case since the first attempt was a misfire. But do believe that having an RSO physically on site is significantly safer than someone watching a monitor in another room. Even if they are watching attentively the response time would be too slow for dangerous safety violations.

Definitely RSO on site would have more chances to save the situation than watching it over the cameras. You know… every second counts.

Maybe if there had been an RSO present he could’ve yelled out DON’T DO IT and caused enough of a distraction to deter it. Now the man gets charged with pre-meditated murder and attempted suicide.

Where is personal responsibility?

As for charges, good. Prosecute and get him some help.

When I go to the range 9 times out of 10 it is alone and any constructive criticism I get is appreciated .
Thank for keeping my typos in check. Dam spellcheck.

@Johnnyq60, I understand your point.

ot sure that an RSO would be able to stop most suicide attempts.

Done even half heartedly, I don’t think an RSO could do anything about it.

But, I’m still a fan of RSO’s being physically present. #1 so they can assist new shooters, #2 so they can watch muzzles of “experienced” shooters who haven’t learned the rules yet, #3 so people are less likely to pick up my bag from the back wall and walk away with it

Didn’t know it was broken.

Do they have to be NRA certified?

My point exactly. You took the personal responsibility to understand. That is all I was saying.

Side note I am not bashing RSOs. They are an important part of the machine. How many is enough, was my concern.