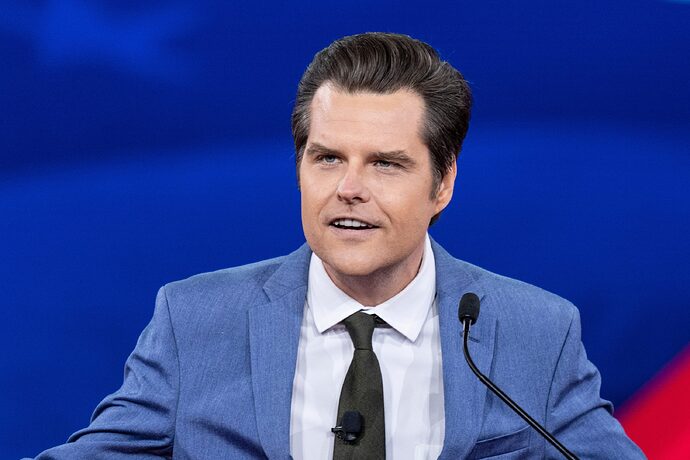 Gaetz Reveals Plan To Fight Back Against ATF’s Unconstitutional Actions

After unveiling a bill to abolish the Bureau of Alcohol, Tobacco, Firearms and Explosives (ATF), Rep. Matt Gaetz (R-FL) detailed a plan to fight back against the agency after their repeated infringement on Americans’ Second Amendment rights. On...

It sometimes seems to me like any and every political party likes the brownie points with their base of introducing bills on certain topics, when the legislature is split, knowing full well there is no chance of it making it out of congress. Makes it easy to say hey look we tried but those other guys wouldn’t do it (and no party is immune to this)

Split party politics reminds me of the World Wrestling Foundation.
Lots of bluster, nothing important gets accomplished, and in the end, all parties head out for a beer.
Price of admission to a WWE show is cheaper though. It is sad seeing a roomful of hot air, or empty seats, and realizing each reps benefit package is way more than many peoples income.

Wouldnt it be easier to cut funds from those goose stepping aholes?

They write their own raises.

I have mixed emotions about split party politics. While nothing seems to really get done when the government is split politically I can’t help but feel that’s a good thing. Anytime the government does something they seem to screw it up! So maybe nothing done is the best thing. After all these years don’t we have enough laws and regulations? As soon as they say we’ve got a new law or a new regulation that’s great the hair on the back of my neck stands up and my Spidey senses go off.

That’s about the best Congress can do. The ATF is “owned” and run by the Executive Branch. This means only the president can disband it. Yeah, choking it’s budget off would disable it for a time, but as soon as another Congress comes in, the budget can be re-instated.

Totally agree with you, especially during present times, but the cost of having nothing done is absurd. Perhaps we could get DC to emulate private industry. Split power, realize nothing will be getting accomplished so hand everyone a pink slip and send them home.

While nothing seems to really get done when the government is split politically I can’t help but feel that’s a good thing.

I pretty much always take the less-government and less-government-intervention side, and about the only way to get that these days is a split government that does less because it feels like most of what the gov’t does is stick their nose in something or other, regardless of which or who it is and into what.