Sitting in the Burger joint last night, eating a Hires, Double Big D, one of Salt Lakes iconic burger joints. The burger is sloppy and messy, add the onion rings and things can get out of hand real quick. Anyways, as I sat there with slimy hands a couple of young guys walk in, they sparked my interest because of the way the were acting, loud, rude, maybe just being kids. Right then I thought, if I were to draw I would make a mess of my firearm followed by “I wonder if I could effectively draw and acquire a target with slippery slimy hands”. I wouldn’t want to take the time to grab a napkin or even wipe my hands on my shirt, if it’s time to act I don’t want to delay. I don’t know, maybe over thinking it but I’m actually thinking about taking some vegetable oil to the range with me to see how slippery would change things.

Grip texture of a pistol matters, definitely. This is my biggest hangup about the old Gen 3 Glocks. I ended up only carrying those with a Talon grip. Too slippery when wet even just a lot of sweat.

Something like the S&W M2.0 grip texture seems to handle this very well. Though, admittedly, I have not yet tried shooting a handgun with anything but water, sweat, or a little (not a lot) of gun oil on my hands. Sometimes eating nachos or wings I do wonder

I could stop this armed robbery, but I just cleaned my pistol.

Don’t overthink this @Mike164 .
You will be good with greasy and/or wet hands. If you really want to test it… just wash hands with soapy water, don’t dry them and try to shoot. You will see, with good handgun and gripping - nothing changes.

Choose the salad next time😁

That sounds like a good idea for a good drill as it would be a teachable moment,

You will see, with good handgun and gripping - nothing changes.

I don’t know, @Jerzy. I think he’d find himself milking his grip, because slippery is slippery, and I believe the element causing it to be slippery will pose a challenge to flesh applying grip coupled with all of the other forces at play during the shot string or firing cycle. Just my unproven thoughts.

I shot a IDPA stage once where the start position was with your hands in a bucket of soapy water. It was not terrible at all.

Water was something I’m sure, but an element that is nothing but slippery (no cutting or diluting agent at all) I think may pose more of a challenge. Again, my unproven hypothesis.

You are probably right, have you ever seen the trick of dipping a screwdriver tip in STP and having someone try to hold it between two fingers?

No, I have not. Sounds interesting though, think I’m going to give it a shot.

I think a good point to the OPs thread would be to consider the alternatives of varying conditions that we may personally find ourselves relative to our training regimens and current skillsets and competencies with our EDCs.

Relative to something super slippery, how about something super tacky as well that would threaten to gum up your gun and that would challenge its ability to cycle properly. Worth considering. We don’t get to choose how we’ll get caught up.

Hope for the best prepare for the worst.

I agree with the talon grip suggestion. I have them on my EDC pistol 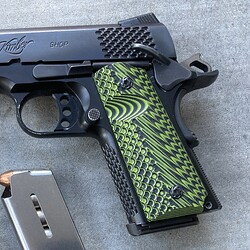 Best thing I’ve ever done to all my handguns. I have had the opportunity to practice, literally, with blood soaked hands, sweat, rain, mud and sand. The most complicated was the blood because it was my own from an injury. Sliced the palm on a newly installed Picatinny rail on my rifle, decided to transition to pistol. I decided to keep going. Great training exercise!

The grips are very aggressive for a reason, they actually dug into my palm and allowed me to shoot, steadily, as the shock took over.
I don’t recommend this course of action, but oil will do, it just doesn’t get as sticky over time! Coke syrup, BBQ sauce or pancake syrup could function the same way.

I did learn an important lesson, grip strength is imperative!

I agree… But only if he grips handgun same way as post or bat.

Using the newest technique known as “nutcracker” it really doesn’t matter if your hands are dry, wet or oily.

With all due respect the nutcracker is not new, no disrespect intended. It is an amalgamation of other established or practiced grips that emphasizes certain muscle manipulations, and you’ll be tired.

We all tend to gravitate to our favorites.

I have my own favorite. In my estimation no one teaches grip better than my friend and brother-in-arms Mike Glover, who teaches Gunfighter Pistol. And I love it because he provides the technical aspects or science behind his method.

Suffice it to say, though, when a slippery or tacky substance that is applied to the human flesh (your hands) there will be a reaction that will degrade your ability to adequately or sufficiently grip the gun.

This is where training in this area would probably assist. But it will have to be test bedded by each practitioner, establish principals and then apply those principals consistently under varying conditions in order to fairly determine its effectiveness as a fundamental. JMHO.

But hey, all training is good training, even if it’s what not to do. It gives us options.

This video is showing exactly the grip I’ve been mentioning. The nutcracker’s part comes with throwing the hands and lifting the elbows. All is about keeping the both hands’ fingers stable and immobile, creating the hinge. Once you extend the arms the highest pressure goes behind the handgun’s grip. Lifting the elbows adds more pressure on the top of the grip, locking it completely.

Great video. I’ve been using many of his videos as a reference to proper handgun handling !

that will degrade your ability to adequately or sufficiently grip the gun.

I suppose the gun itself will have something to do with it as well. A 44 mag will be more difficult than a .380, a 45 micro will certainly be tougher to control than a full size 9mm…

Absolutely, it’d be like shooting an elephant gun in pistol size as well as a rocket ship in little palm size! What a ride! Good luck with that shot string!

Interesting point, to be prepared and train. I’m a worrier, not a warrior. However, I’d be afraid to have an accident at the range if my hands were slippery there. I’m “that guy” who always grabs a bunch of napkins.