We don’t have to like history, we just need to learn from it. 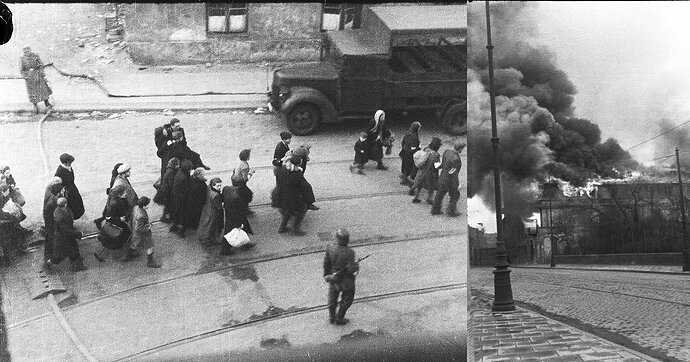 The photos are extremely valuable.

That’s actually pretty cool, not the events but the existence of the photos.

You don’t have to go to Poland to see government sponsored mass shootings. There are plenty of photographs of Wounded Knee.

And elsewhere—
http://www.armgate.com/genocide/pictures/
…sadly ad infinitum on every continent

but the Warsaw uprising photos, rare because they were secretively taken by a Pole, are a very recent discovery, and that is what made the news.

It’s peculiar how often genocides were photographed and documented by those committing the murder. It’s almost as if they saw nothing wrong with what they were doing, perhaps even proud of it.

Maybe that was the 19th & 20th century version of criminals livestreaming their crimes.

I wonder if there are some lessons in this for us? (Other than the obvious perils of a disarmed citizenry, I mean.) Normal people can do some pretty horrible things when their mind isn’t in the right place.

Brainwashing is a very powerful tool.

If you’ve ever asked yourself whether
you would have been obedient in 1930’s Nazi Germany – now you know.

I heard a longer version of this… can’t recall who it was, but he was talking about how everyone wants to believe that they’re some righteous soul that would have resisted against the Nazis or helped slaves escape the Confederacy. But statistically, most people will go along with it. We have the benefit of living in a free society, but that doesn’t necessarily mean we’re better individuals. In the wrong place and time, most people are corruptible.

Democide murder of people by a government which has power over them .
Democide has occurred many times and is noted in the bible. More recent are Hitler, Stalin, Mao, Kim Il-sung and his son to name some prominent ones. There have been many more.

Democide murder of people by a government which has power over them .

Holy cow. “According to American political scientist Rudolph Rummel, democide surpassed war as the leading cause of non-natural death in the 20th century.”
Democide - Wikipedia

That’s quite a claim, considering what we know of war in the 20th century. But I can see how that might be true, given what we also know about 20th century fascists, communists, totalitarians, and despots.

“According to American political scientist Rudolph Rummel, democide surpassed war as the leading cause of non-natural death in the 20th century.”

Yes, I will agree that perhaps most people are corruptible. Some aren’t, and help to whatever degree they can, such as my father’s mother. She lived in Warsaw during this time, and everyday going to work, she had to walk past the ghetto. When she had some extra bread, she would throw it over the fencing to waiting hungry children.

If she was ever caught, dad said she would have been shot on the spot.

The Stanford Prison Experiment showed clinical proof that when people are put into positions of power over others, they tend to abuse the power and those they have power over.

The recent events related to the Plandemic showed us how easily masses of indifferent people can be turned towards demonizing their friends, families, neighbors, etc. Prior to 2020, people often wondered how neighbors could be persuaded to turn-in their neighbors, and how awful it was that the government could persuade children to rat-out their own parents and family members. Now we have seen it happen in our lifetimes.