Out for a walk

Some less lethal choices could cause an issue … like pepper spray… 1 my wife is severely sensitive to it; 2 you have to be close almost too close for effective deployment; and 3 if the wind conditions kick in or change direction you can make yourself a victim. Not knocking less lethal means, just showing as with carrying, know the limitations of your choices.

I had one of the most frightening experiences a few months ago while walking along a two~lane road after a short night hike. It wasn’t real late at night but I needed to get to my car quicker than usual instead of going back the same way I started out. As I was walking, a car ahead of me was approaching but it slowed down and made a u~turn behind me. All the blood suddenly seemed to race down my body and I almost panicked. I walked quicker than usual and took out my hatchet that was affixed to my chest. Fear set in as I realized it was no match for a gun if the driver had one. The car then sped up and that’s when I jogged toward my car, still believing the worst. A few seconds later the driver was opening the side door on the side of the road to let his dog out. He smiled at me, not knowing that I had been in fear for my life a few seconds earlier. Then a woman approached him in her car and she got out to greet him. I had assumed the worst but nevertheless, I was aware of what might have happened and preparing for the worst. I never hiked at night again after that. I’d only do that if I could conceal carry my gun. People are prohibited from having conceal carry permits in my county, and the sight of a gun or rifle would send most people here into a panic.

Joe,
I agree with you whole heartedly. When you use pepper spray, everybody gets pepper sprayed, especially in a close environment. The deployment distance can deplaned on if you’re delivery system dispenses a spray or a stream as well as if you’ve trained/practiced with an inert spray. My initial point was to not focus on just the gun. Know you’re capabilities and limitations, both personally and in the tools you carry. Think about ALL of the possible consequences, before you encounter it.

Wasn’t trying to dis your comment, just using it as an example in knowing your abilities and equipment and understanding the positives and negatives of those choices. Pepper spray was one I could easily explain as an example.
Granted our latest thoughts have been focused on the wireless hope punchers we now carry, so that normally becomes the first thought and movement. Training in secondary tactics would prove useful.
I agree that considering situations may required covering your carry but remain thoughtful about moving to option 2.

i walk my dog every night about 10:30 pm. It’s a residential neighborhood with a golf course running through it so there are a number of areas where the course crosses the streets that there are no houses or lights. The street I take is pretty well traveled and a lot of cars pass by while I am out. There is a substantial number that cruise by slowly as if casing the pedestrian, usually containing either single males or groups of teens. The area has a lot of senior citizens who make inviting targets. I always carry my Glock 30 on the walks as well as a powerful tactical flashlight. I also occasionally run into coyotes and javalinas as well, but the flashlight as deterred them so far. One can never be too careful . . . or prepared.

I really like how you went from condition yellow the condition orange so quickly! Good job!

As part of recovery from second neck surgery, doctor wanted me to walk around 30 minutes per day. That has grown to 6-10 miles every other day, which takes up to several hours. BTW I just turned 69 yo.

Years ago I purchased a belly holster and rarely used it. Now I carry one of my compact guns, CCW license, tear gas lipstick dispenser, and folding fighting knife. Also use a camel back and a fast-paced military walking style. People tend to avoid me or give me sufficient space to pass-by.

Being “overly” prepared with different levels of response and trained sense of surroundings, has made me an undesirable target. But just in case, I mentally practice scenarios during those walks.

I mentally practice scenarios during those walks. 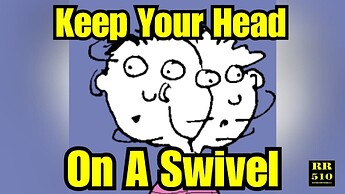 Good Job! Years back at a ATM two men jumped out of a parked car and said how about 20 bucks for us? I put my hand in my pocket on my AMT .380. They said do you have a gun. I said What I have you do not want.
They left and used a knife on a man down the the street. Stay Safe.

I need to practice telling ppl that I think are up to no good to “stay back, don’t come any closer “. Last thing I want is for a person to get too close to where it becomes a fight for our gun.

All in All just remember the rules!

Awareness affords the luxury of Assesment leading to reaction. If your unaware, you go directly to reactions. This could get dangerous and you may not be quick enough or you may make mistakes. Best to be aware, then get ready, then react from ready position.

Good Work keep it up> I do not carry tear gas. You could be in court when you had to use your gun with the you could have used the tear Gas problem.

I do ASP vids everyday as something to keep me mindful of how fast things can happen. Right now I CC a Walther PPQ q4 Tactical 9mm, POM pepper spray, and I always have a compact edge weapon.

Curious what people do when forced to travel naked to the gun free states. I’m naked in the Communist Republic of California, not by choice btw. I find it disturbing when a police helo starts slow, low circles overhead!!

I disagree with #28. The only thing you should say to a cop is: officer, I’m emotionally upset right now and I need to talk to my lawyer.

Very good point, I changed it. Thanks!

I would of giving the leach to my wife , because my weapon is on my right hip with a shirt over it . Need both hands one to lift my shirt and the other to draw.

Don’t over look the fact that the older we are the more of a target we become. There are plenty of reports showing old people being sucker punched and mugged in urban areas across the country. Even though you may be prepared, the fact that you’re older will be taken as vulnerable and that needs to be considered during situational awareness.