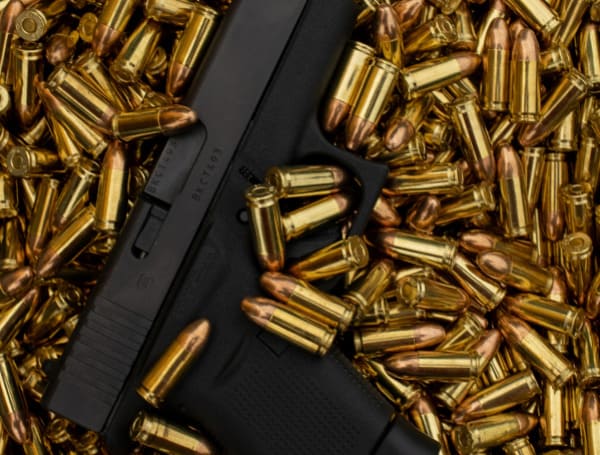 by Bronson Winslow Oregon voters on Tuesday passed Ballot Measure 114, one of the most restrictive gun control measures in the country. The ballot measure

“the legislation will add a gun safety course regulated by the police and restrict magazine capacity to ten rounds. In total, the new legislation will cost the state approximately $49 million annually“

the new legislation will cost the state approximately $49 million annually

It’s not their money, so they don’t care what it will cost. As to the rubes that voted for it, it is not surprising when we read about the percentage of sheep that willingly took the injections. Most people apparently just do what they are told. Why bother thinking and questioning when it’s so much easier to just believe what you are told.

Obviously, we are the problem and more taxes is the solution…

114 so so much more that what they claim it does.

I hope 114 is challenged and removed before the gun stores go out of business, basically, if its not a revolver or single shot rifle/shotgun, its illegal under 114…

The “class” does not exist and it will not exist.

If the “class” did exist, you would aready have to own a firearm in order to ever buy a new one. If you have never owned a firearm, then, under 114, you can never own a firearm

It is not clear how the measure affects current gun owners or gun owners who move to the state. For example, if you own a rifle or pistol that you acquired years ago, must you report that possession? Ditto, someone who moves to the state with firearms. Must they report what they own and submit to a background check?

Ditto, someone who moves to the state with firearms. Must they report what they own and submit to a background check?

If OR got their idea from CA, owners must report and/or get rid of their firearms.

The Supreme Court leaks like a sieve. I have the right to remain silent! They don’t need to know s#£t! Furthermore, who moves towards a communist state? Common sense gun owners should move to red states that are inherently friendly!
Let the unarmed live by their own rules. Should be as much fun as watching people in NY getting thrown under a train!
If I was a gun owner in any blue state I would escape by any means necessary! I hear Florida is a free country!

They say grandfathered in but they are saying all kinds of things to try and get people to vote yes.

In the little description to vote yes or no, they actually stated magazine limits to 10 rounds is proven to reduce crime.

The Portland Media Wants You To Think This Is Just About "background checks." We've had those for decades.They are deceiving you. You've seen the headlines. You may have lived them yourself. Violent crime in Oregon is skyrocketing. Police are not...

With 114 looking like it passed, called my gun shop and told them the 2 new guns I want ordered that should be 114 compliant for being in the woods and self defense…

Never intended on getting that caliber, as such the large size should help with recoil, but both should fit the magazine limitations, be grandfathered in.

Granted, the next county down, the Sherrif has already announced they will not be enforcing the mag ban and such. 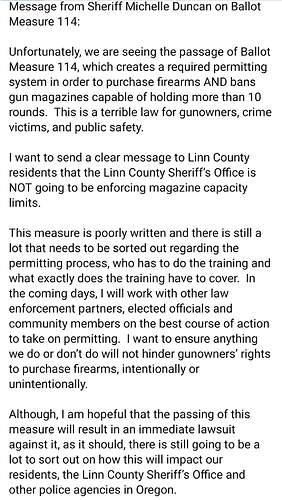 Is it a publicly assessable database, or one maintained by the local Sheriff Dept.? Oh, wait, it reads: “Gunowners” not permit carriers; woww, oooohhh…smh.

Oregon voters narrowly passed one of the nation's most restrictive gun laws on Nov. 8. But several of the state's county sheriffs said they won't enforce Measure 114, billed as the Reduction of Gun Violence Act.

11.20.2022 LAWSUIT FILED. Oregon Firearms has filed the first of what we believe will be numerous lawsuits to put the brakes on Ballot Measure 114, Oregon’s gun ban initiative. Although the media is not giving it much attention yet, in the lawsuit...