You need to know.

Thanks for letting us know. I will take rational measures to an irrational decision.

Oregonian’s will have to fight harder for their rights. To change this and not let it happen again. This can be a learning lesson to us all.

It’s a disease that started in California and is slowly working it’s way North and East.

I am not a medical doctor or any kind of psychological professional but I can see it is some kind of emotional disease that doesn’t have a name. Maybe it is a fear of guns. https://www.gunlaws.com/Hoplophobia-GunFear.htm
The problem is how to convince people to get help. It not very well known. The scary thing is we may have to loose 2A right to prove it and the thought of people needlessly dying because of that makes it worth the effort. We are already seeing it in schools. Thanks for letting me vent. 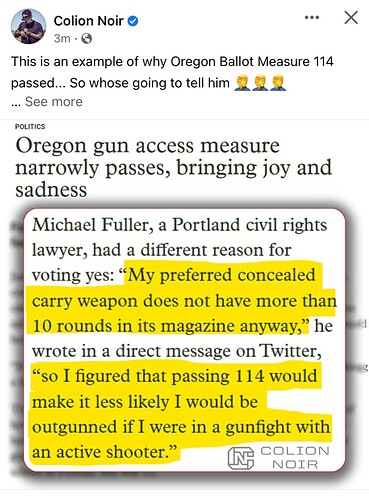 I am changing my opinion they are too tired to think.
But seriously I had a conversation with two anti assault weapons people who were very open to talking with me and we were finding common ground. We both agreed that there should be more training for people to be responsibly armed and I could see something in there eye that they were starting to realize a law can’t protect them and a law can’t stop someone from getting a gun. I didn’t push the issue. Hopefully they will start to think unless they read Michael Fuller’s post. Which actually makes a lot of sense if you don’t think about it. If I could only figure why that is.

Ohh, the grey matter started convulsing…and rational thought started making its advance at transforming their logic. When you leave them alone after seed planting, they’ll think about it more and more, and then as they process that information and silently start to question their previous flawed positions on the matter, inner conflict ensues, and then suddenly they will find themselves at a decision point. Because, when your eyes become open to the truth, it’s hard to continue walking around pretending that you still can’t see! lol. That’s all I’m saying!

That’s like a guy who drives a Geo metro voting that cars should not be allowed to have more than 3 cylinders, so he can’t be out-driven on the roads.

It’s a disease that started in California and is slowly working it’s way North and East.

I think this disease unfortunately kicked off in multiple epicenters. The urban areas in CA, DC and NY City. We might have been able to keep it from spreading if not for the multiple outbreaks in these densely populated zones with their unprepared masses. If only these people weren’t so reluctant to voluntarily taking the nearly 100% effective vaccine that responsible gun ownership provides. We could have avoided this whole plague of defenseless fear.

That’s true. I was born in California. I lived there as a child and I did multiple training rotations there when I was in the military. All I can say, is that as soon as I was done in the military. I got the heck out of there.