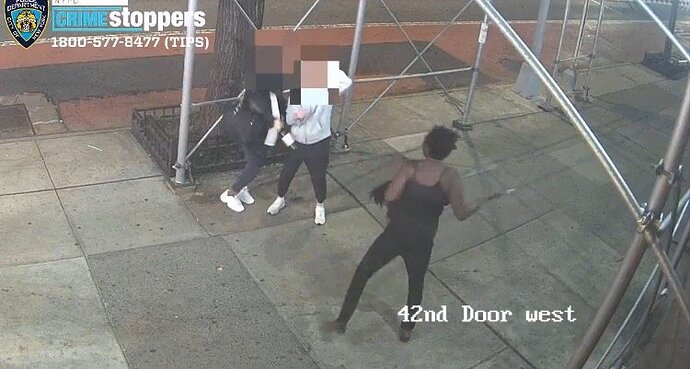 NYPD Releases Surveillance Footage of Suspect They are Looking For in Hell's...

NYPD on Monday released surveillance footed of a suspect they are looking for in the Hell’s Kitchen hammer attack on a 31-year-old Asian woman. Police are asking the public for help identifying the attacker, a black female, about 5’9″ inches tall....

It seems almost every time there’s an incidence of violence where a gun is used, it becomes an argument from the left for more gun control. But why not the other way around?

With reference to the upcoming SCOTUS hearing on New York State Rifle & Pistol Association Inc. v. Corlett, I’d suggest that every random act of violence, like the one in this video, is an argument against requiring “proper cause” in order to obtain a CCL. Between an increasing crime rate, and anti-police social pressure, everyone can justify a special need for self-defense.

I was always a proud New Yorker and now I’m just happy to be residing in VA. Where it’s more peaceful.

Who in the hells bright idea was it to close the mental institutions? I’m guessing the same people that want to empty the prisons. This insanity needs to be put to and end. Just because lying media tells us that is what people want, doesn’t make it so.

A lot of people, especially in California, like to say that it was Ronald Reagan. That’s not entirely true, however. The LPS Act of 1967 was a bipartisan bill that sought to end involuntary commitment to mental institutions. It wasn’t the simple “balance California’s budget at the expense of the mentally ill” that revisionist detractors would have you believe.

I’m an ex New Yorker! I escaped a very long time ago, think the end of the Apollo Program! I bring up the Apollo program because everyone my age knows where they were not to mention the timeline, in addition my dad was involved with every mission! The last cool thing I did for my dad was museum quality shadow box all his mission patches.
Really glad you’re happy, peaceful and off those streets in today’s environment! It was bad growing up, I left the concrete jungle for the palm trees of Hawaii. It was the first time I saw crystal clear ocean water as opposed to any beach on the Atlantic!

Amen brother. It wasn’t that bad in the 1960s but it was a long time ago. Aloha former New Yorker.

I sat and watched Neil and Buzz in my living room on a black and white TV.