I am wondering if private police will end up being a trend in our futures considering the move to defund the police. It brings up a whole lot of legal ramifications. It would certainly increase costs. It should also lead to reducing government taxes but probably won’t.

What are your thoughts?

You rarely see a tax go away… A few years ago, a local tax expired. They kept on collecting it for a year or so, then it was renewed.

Private police, as you said would bring up a lot of legal issues. How would they be empowered to enforce the laws? Could they use force like police can, or would they be under the same self defense laws of say a concealed carry person?

For the short term, I would think people would be on their own for protection.

My concern is the establishment of a NATIONAL police force, organized on para-military lines. This is a dangerous policy - look at countries with them - that would only serve the wealthy and influential, and reduce our constitution to toilet paper once again for the ordinary citizen.

We have small villages within our city that assemble a small, low-budget, Mayberry style police force, with one or two officers who share a patrol vehicle. They’re real police officers, but their job is to monitor the villages and respond quickly until they’re relieved by the big-budget municipal force that patrols the larger area.

I’ve also seen a few high-end neighborhoods that hire private security. Outsider looking in, I don’t know what their law enforcement capabilities really are. I assume they just track who comes and goes and call the real police if something bad happens. I don’t think any private security firm is going to send their people to detain potentially violent rioters, burglars, felons, etc.

I could see this expanding in larger cities as police forces dwindle from early retirements and low recruiting numbers. But it would require some type of neighborhood organization (like an HOA) to share the expense. Security officers aren’t paid very well, but that doesn’t mean it’s cheap to hire private security.

My concern is the establishment of a NATIONAL police force,

We already have several. They have specific scope of enforcement, but often overlap. The FBI has evolved from an investigative agency and sometimes provides enforcement support, but the DEA, ATF, IRS, Marshal service, and several other agencies can send armed and armored enforcement detachments. If someone were to combine their limited jurisdictions into a combined force, that would be cause for concern. Such a force would have a fairly unlimited scope of enforcement, and would be difficult for the White House or Congress to control.

Technical advances in the world bring more changes than just that technology. With technology sky rocketing and people trying to keep up with it is an awkward situation. Those who are tech savvy can progress fine but, those who are not Tech savvy are suffering. Heck, I am still trying to set my new T.V. up after having it for a week. No rabbit ears or antennas required.
As for the Police force, we should be taking care of our own safety and security. The police are our back up. Just like if we were deep frying a turkey outside,(preferably for safety reasons) and the oil spills over the side and catches fire. With a fire distinguisher by our side and proper technique we put our own fire out. If it spreads out of control and out of our abilities, the fire department can help and explain what you did that was wrong.
Take care of your own security and safety, prevent, detour problems and bad situations.

I asked this very question of my New Yorker friend. His answer was “protection rackets will start”.

Gated neighbourhoods have private security patrolling the streets. Some ethnic areas have private police, due to residents not communicating with city police for religious reasons. These are unarmed and toothless when push comes to shove.
I don’t see a legal framework for private police to operate on equal ground with traditional police, which opens a lot of opportunity to organized crime. All in all, this is a step toward 3rd world status.

As for the Police force, we should be taking care of our own safety and security. The police are our back up.

Right. How are you prepared to deal with a protest? 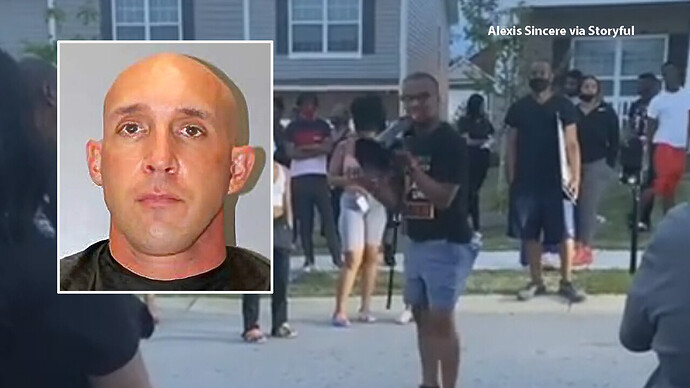 Army Sgt. 1st Class Jonathan Pentland has been charged with misdemeanor assault for shoving a Black man outside his home earlier this week after ordering him to leave the area repeatedly in a three-minute, viral video.

These are unarmed and toothless when push comes to shove.

I’ve wondered for years about the private security guards that come out and direct traffic when their businesses close and employees go home. Some of them positively suck at directing traffic. Would there be any legal penalty if I just ignored them? Or can any old jerk like me simply stand in traffic and tell everyone else how to drive?

Point being that private policing may not have the enforcement of the law, but could still do some good. Or not.

A national police force would be illegal. Federals agencies, such as the US Marshalls and FBI have narrowly defined jurisdictions. See wikipedia:

The Posse Comitatus Act is a United States federal law (18 U.S.C. § 1385, original at 20 Stat. 152) signed on June 18, 1878, by President Rutherford B. Hayes which limits the powers of the federal government in the use of federal military personnel to enforce domestic policies within the United States. The Act was passed as an amendment to an army appropriation bill following the end of Reconstruction and was updated in 1956 and 1981

The job of security is to de-escalate and prevent. Not to enforce. That is when the LEO should get involved.