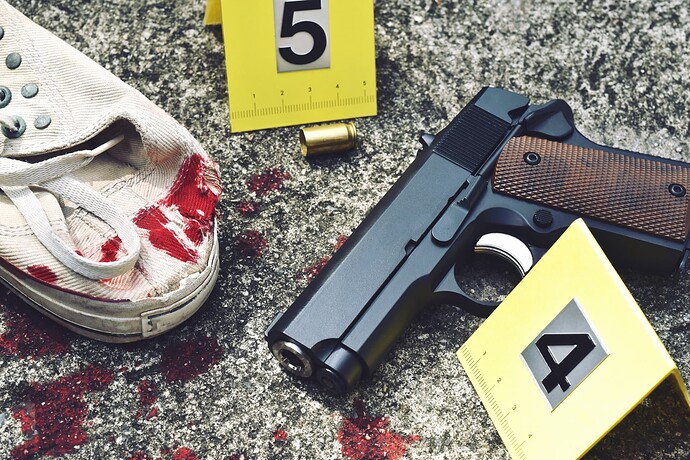 It was a great investment in time.

Dave McDermott a 25 year veteran criminal defense lawyer on the USCCAs call list reviewed on "how to make the call after you’ve shot someone.

He encouraged if possible to have a second person make the 911 call and NOT to say “I’ve shot someone send help” just say “send an ambulance and the police” and provide as little information as possible until your attorney shows up.

I spend New Year’s eve with a close friend whose a 30-year civil attorney - disagreed.

His advice was to identify yourself physically so they know who made the call and tell them where the gun(s0 are going to be when they arrive so the police are not guessing when arriving at the scene.

You should assume that anything you say to the police will be used against you.

I’ve been attending Mr McDermott’s several events. I like him and the way he makes everything clear for the listeners.

Regarding calling 911 - my opinion is somewhere in between, meaning - identify and describe yourself, tell how many people need medical attention and ask for ambulance and Police. Using words like “gun”, “shots”, “shots fired”, “killed” never sound good to 911 dispatcher. If you are certain there is no more threat to you, less you tell over the phone, better chances that your attorney help you to come back to normal life very soon.
It’s always a good idea to describe yourself to be recognized by approaching LEOs. Police trusts nobody, but more they know how you look, more chanses for you to not get hurt.

It’s my understanding, from lawyers and personal experience, that the best thing a citizen can do is to Shut Up. Remember 911 is a defacto police organization, talking to them is talking to the police.

My opinion is that I Disagree with saying nothing more than send police and send an ambulance.

Essentially, I support saying and doing what is on the back of the USCCA membership card.

I would go for some limited, high altitude, low resolution info depending on the circumstances…he dropped that point to item on the ground…They got into a white truck and went that way…there were at least two of them both wearing dark hoodies…etc but KISS, if in doubt don’t say it, and probably don’t answer follow up questions.

I am also extremely averse to ever answering yes or no, I would rather make a stand alone statement if I feel it is warranted. Like instead of “do you know what color the sky is” answered with “yes”, I would look up and say “the sky is blue” (if it looked blue at the time), IF I was going to answer, instead saying “yes”.

Classic example, if asked “mind if I search?” I won’t say yes or no, I will say “I do not consent to search” 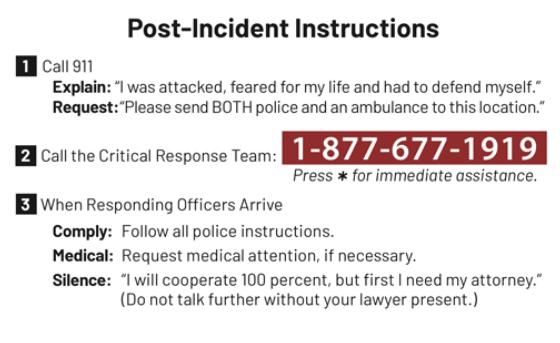 @Nathan57 this is exactly what the USCCA Concealed Carry & Home Defense Fundamentals Instructor teaches. Which makes perfect sense. What is encouraged is; we’re not against Law Enforcement by any means! They are not our enemy! They have a job to do, as do we!

However, due to the physiological and/or psychological effects of a critical incident it’s best to provide only the essential information until you’ve had time to talk with an attorney. Why? There are things that you will remember days later that you cannot recall immediately after the incident. Or there may be things or events that you may think occurred during the incident, but evidence may not support, or may not have happened at all. Only the essentials, as stated, should be offered. Don’t become a witness against yourself by getting chatty, as this could be a resultant physiological side effect in itself, that may or could be unintentionally or unfairly taken advantage of. Seeking medical attention provides time away from the incident and for professional medical personnel to examine or treat you for whatever may be going on before, or during, or as part of an official investigation. Therefore, we should exercise our right to be as accurate, and as compliant as possible. Consult with your attorney before offering a statement as to the details of the event.

As for the second person calling…well, unless they are with me involved in the incident as well, I don’t know if I’d rely upon them doing any calling for me. Their account may be different and could thereby be troubling for me. I am of the first of what I learned, that is, I’d rather I be the first to report the incident rather than a second or third party. Now, if I’m out of commission then I have no control over who makes the call. But if I can, I’d rather make the call, because I know what information to give them. specifically. And I would never use language such as, “I shot someone…” That only paints you as the one to watch out for…IMO. It’s always, “I was attacked…” or words to this effect. As this is the only reason that we would use our firearm. In defense of ourselves, family, or others’ lives. Never stuff.

Remember brothers and sisters, if/when you call 911, you are recorded.

Are 911 recordings available to the public?

Are 911 recordings available to the public?

Nope, unless you give written consent or upon the court order.

Yeah, and tax records are supposed to be private too…

In other words, have no preconception that your 911 call will be private.

Some states release 911 calls regardless of the participants feelings on the matter. I think the USCCA post incident response is well thought out and should be practiced and submitted to memory. Police know more information, know that you have acted in self defense and are aware that you may be armed when they arrive, it may just save your life.

Some states release 911 calls regardless of the participants feelings on the matter.

I don’t know any that does that. But I won’t argue the point either. I do know, it’s never about feelings, but always about facts. LEOs have to act dispassionately, which is also why we have to be compliant with their commands, and not challenging. Argue the law later. They are not there to be legal scholars; they are there to exact Police Science on whatever situation is calling for it.

Whatever the case, chances are, if you’re involved in a shooting (right or wrong), you’re going to be arrested or at least detained, unless the incident occurred on your own property, and it is crystal clear that you were not at fault. But in general, the Police don’t know you, nor do they know what the exact details are, or who or how many were involved. Their heads are on a swivel and the pucker factory is working overtime! So, compliance is our best option. Things go better when they have ruled you out from being a threat. Your time to shine will come, “after you have spoken to your attorney.”

The USCCAs instructional content is stellar, clear, and make sense. If you haven’t already, join the USCCA. If you don’t know this content, find you a class today.