@Kevin29 is referencing another Biden-ism where he recommended shooting the intruder through the door.

Never fire a warning shot. It’s the equivalent to…

All it does it tell the attacker you aren’t really serious or are indecisive. It takes away valuable ammunition. Both in terms of cost (lol), but also thats one less round in the firearm that you may need later especially in smaller capacity compact firearms we are likely to carry. Maybe the first round is all you have because now you have a FTF/FTE and the gun is jammed. Anything can happen and oftentimes Murphy makes sure it happens.

Additionally, you don’t know where those rounds will go. Rounds will skip off of floors (dirt, concrete, asphalt, etc), if they fragment now you have multiple projectiles. If you shoot in the air they can travel a looooooong way before falling to earth somewhere. We own every round.

And maybe most importantly a disingenuous prosecutor can argue any number of scenarios that are not in your favor.

Warnings shots are for dogs hanging around the chicken coop.

I hadn’t heard that “Biden-ism”.

True story. A friend of mine from high school got into drugs of all kinds and one day in his mid 20s he got into an argument with his GF and chased her down the street with a tire iron screaming he was going to kill her.
She ran into a guys house she barely knew and banged on his door and he let her in.
He then locked his screen door to the porch and locked the screen door and the door to his house.
The guy busted thru the porch screen door and busted thru the screen door of the house and was in the process of breaking thru the wooden main door, all the while screaming he was going to kill them.

The home owner stated he had a gun several times and the guy breaking in his last words was “you better have a big gun” and kept breaking the door.
The home owner then fired a single round from a 357 mag. thru the door striking him in the center of the chest, he made it out to the sidewalk and collapsed and died in his GF arms.

This happened in around 1987 in Niagara WI. The homeowner was cleared with no charges.
Stupid is as stupid does.

These words above was confirmed by few wise people… LEOs, attorneys, Instructors…
This is not negotiable…

Warning shots don’t work, you’re not going to scare or stop someone intent on doing you harm! Where are you aiming your warning shot anyhow? Be sure of your target, what’s beyond and in front.
The lock on my front door is all the warning you need! We shoot to stop the threat.
If my life is at stake here’s my warning shot! 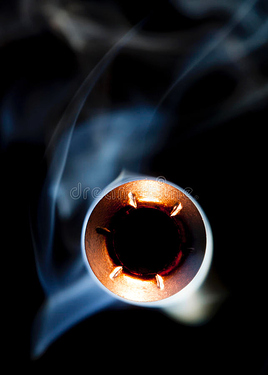 I’ve heard that the social workers they’re planning on replacing the police with in some cities are being trained to shout this devastating phrase:

“Halt, or I’ll turn on my computer and report you!”

Here’s something else to consider. You fire a warning shot and you’ve got either a FTF or FTE. The warning shot didn’t discourage your attacker who is now charging and because of bad luck/poor maintenance/cheap ammo, you’ve got a malfunction.

If you hadn’t fired the warning shot, you would have had a shot to try and stop the guy.

I hadn’t heard that “Biden-ism”.

More advice from Joe Biden: 'Just fire the shotgun through the door'

In an interview with Field & Stream magazine on Monday, Vice President Joe Biden once again touted shotguns as the best weapon for self-defense, offering advice similar to the questionable instructions he gave during a Facebook town hall...

When did I say it was acceptable to use a warning shot?

I also said not to use a warning shot.

It’s like you better stop or I’ll tell my Mom on you.

My warning is when I am pointing a fire arm at them.

My warning shot is into the most serious threat I am facing. Let that be a warning to everyone else that I am serious, I just shot somebody.

That’s how warning shots work. Dumping a round into the ground just tells all the bad guys you have a gun and are not serious about it’s use which means bad things are going to happen to you and quite possibly force you into a bad position that you have now aggravated by discharging your firearm previously. Now you are part of the problem.

The taking of a life is the last resort and a resort held only when there is no other option. In a riot scenario there is the “blood in the water effect” if you drop the guy/girl coming at you with a weapon you very well may have others that see him/her go down and “charge the hill” and even if you engage systematically and precisely you may get “collateral damage” as rounds do go through. It’s a $h!t Show, much the same as plowing through a riot in your beaten up car because you were almost killed because you stopped.

Hey, some moms are real mean… that is a threat they should take seriously.

Trying to keep my eyes dry after laughing. Reminds me of Indy Jones shooting the guy with a sword.

Yup, don’t know to this day if it was a warning shot and he hit the guy cause he was firing thru the door blind.
We will never know.

Trouble with a warning shot, besides the good points others have made, Especially in a crowd, is you have to remember every bullet has to land somewhere. It dosent care if it is a bad guy god guy or child walking down the street.
If you fire, it should be for fear of life and land in the bad guy, no where else. Warning shots are second to spray and pray.

Generally, no. However taking “blind” shots towards your front door in the event of an attempted home invasion might make sense. Hey, you have to do what your gut tells you. The one situation where it might be warranted is in a rural standoff at a couple hundred yards, assuming you know the “target” and everything around it. Call it aggressive communication. Even in that situation, it might start a fire fight. Think cops/feds vs a local community/militia. Making a wrong move could be disastrous… but… if said community/militia believes it is unjustly being ‘pressed’ up against a wall, a warning shot could signify to the public servants: look, do you really want this? Cause we’ll give it to you.