NRA is always using scare tactics to get money, but latest contact says there is a proposal right now for a law to force the registry of all guns. Is this legit? It would be a huge step for our communist party in power to retroactively make you a felon for not letting them know where and how to get your guns when they declare Marshall Law.

Welcome to the family @Dene and you are in the right place at the right time.

From Gun Owners of America.

Gun Owners of America and Gun Owners Foundation are once again taking the ATF to court.

GOA and GOF just filed a federal lawsuit against the ATF’s proposed “Ghost Gun” and Gun Registry Final Rule, which is slated to take effect August 24.

This rule imposes near-universal gun owner registration and restricts the ability to make your own guns at home—a tradition which is older than our Republic.

After the recent Supreme Court decision that reaffirmed our Second Amendment rights to keep and bear arms, we are optimistic that we can win this fight.

But I know it’s going to be a lengthy and expensive legal battle, similar to what we’ve gone through in our bump stock case, which is on appeal to the Supreme Court.

The ATF and their gun control lawyers will be fighting us tooth and nail in hopes that they can keep dragging out this legal battle until our funds are depleted.

That’s why YOUR support will be essential to keep us in the fight for however long it takes—especially since this battle may end up at the Supreme Court.

Please make a tax-deductible contribution to Gun Owners Foundation’s Legal Defense Fund to ensure we have every resource we need in our new legal battle against the ATF.

I should note that we have already put the ATF on the defensive.

Thanks to activists like you who sent over 65,000 angry comments to the ATF, the rule was HEAVILY modified from its original proposed version.

Here are three of the most significant “victories” that our pressure campaign against the ATF achieved:

You will not have to serialize (read: register) every new magazine, barrel, or trigger that you use to upgrade your existing firearm.
You will not have to register a firearm simply because you Cerakote or color your firearm.
And you will have greater protection when having a gun dealer check out or modify your privately made firearm—as now, the requirement to serialize a homemade firearm has been limited to only apply when a dealer takes that gun into his inventory overnight.

In fact, the ATF explicitly concedes that they watered down the regulations because of the “numerous commenters” like you who opposed them.

Now, I want to be as clear as possible…

That’s why our legal team at Gun Owners Foundation will keep fighting until the ATF’s ENTIRE assault on our rights has been gutted.

Gun Owners Foundation firmly believes in fighting based on the text and history of the Second Amendment.

Rep. Lauren Boebert has introduced a bill in the House to REPEAL the massive gun control law that was enacted in June.

Here’s what we’re fighting to repeal:

Does anyone have an update about the pistol brace rule changes?

Thank you for sharing that info @BRUCE26

And our neighbors to the North today. 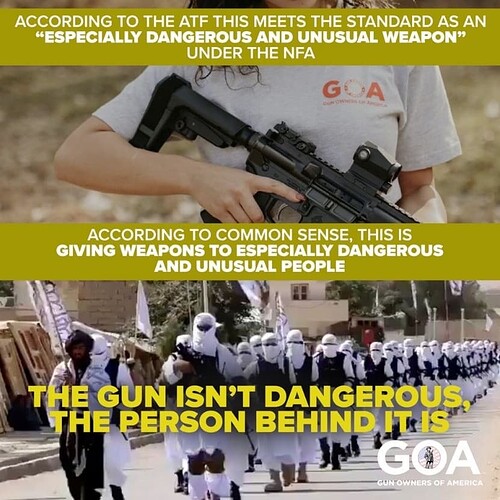 Scare tactic or not, I would rather know what’s out there. There’s always some politician that has been sent to represent “we the people” that winds up doing something scary, alarming, or deeply concerning. A lot of the bills being proposed don’t see the light of day, but that doesn’t mean that we shouldn’t keep an eye on what’s going on. The one thing that we shouldn’t do is become so distracted by what’s going on with the national stage, that we become oblivious to what’s sneaking through the back door where there are no cameras or media reporting. Keep your head up and your eyes and ears open.

Back in if I remember correctly the 1990’s Congress passed a law that made it ILLEGAL to make a NATIONAL GUN REGISTRY. So if Biden and the ANTI-GUN PEOPLE/GROUPS want to make ANY TYPE OF GUN REGISTRY IT WOULD BE ILLEGAL. Also note that Biden also wants to sign onto the UN’s SMALL ARMS TREADE TREATY. And in it it does call for ALL FIREAMRS TO BE REGISTARED THE WORLD OVER. AND THEN THIS REGISTRY WOULD BE GIVEN TO EVERY COUNTRY THAT HAS ALSO SIGNED THE TREATY. And that means that EVERY country would know who owns firearms and not only what type but how many and the address of where they are.

And just because it’s illegal has that stopped them yet?