How many guns do you own

One is a Mosin I got when they were stupid cheap

Same here, a Chinese T53 that allowed me to play around with it. I’m no gunsmith and I bought the rifle (or, was it a carbine?) for educational purposes.
I’m still no gunsmith.

I do not own any guns that I have not fired. I have always thought about purchasing a display piece, but I would probably still want to fire it at least through 1 full magazine.

Now, a gun that will be mine, but hopefully not for many years, is a Colt Police Positive that was my grandpa’s. Dad bought it for grandpa. Grandpa never shot it, then gave it back 30 years later. Dad says it’s mine, eventually. Oh, he bought it for grandpa, shortly after I was born.
I don’t know if I’ll shoot it or not. 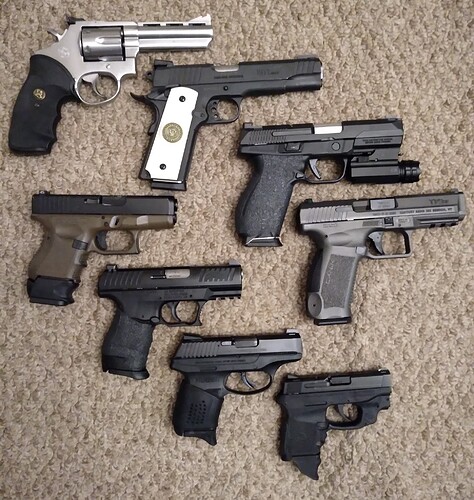 Zero. Now if I get a certain gun that may change.

I do not buy a gun unless I have a specific purpose for it. Now I do have built in redundancies for what I have.

I’d gladly buy a few expensive collectors items, in just days, after I win the Powerball. For now all my money seems to be tied up by bills, Christmas, my wife and the ever growing inflation!! Maybe another ‘free’ check from the new generous administration will come so I can purchase a new firearm. Got to looovvve some ‘free’ government money.

I do shoot everything I own. Although I have quit with the 3" shells in the shotgun, no need for that much kick for what I do.

Just out of curiosity, does “because I wanted it” qualify as a specific purpose? Asking for a friend.

YES! You bet your ass

If you see a firearm you’d like to have, remember these 2 things:

After review. I’ll allow it.