If you are new to firearms, I would suggest whichever one you are more proficient and familiar with. That being said, you might search out proper training and practice and apply it to your situation/layout. Be safe.

I also have a Ruger EC9S. So your saying a 9 is better because it won’t travel as far through things. Ok. My wife has a Phoenix arm HP22. That she is learning on. But I have heard alot of people saying a 22 is not good enough. What are your thoughts on that Erik10.

Any firearm you have regardless the caliber as long as it functions is better than having no gun at all.

I wouldn’t say it’s the most effective, but it would get the job done. I do know that.22lr will go through 1/2" of plywood at approximately 400yds.

I would also recommend a custom bathrobe! 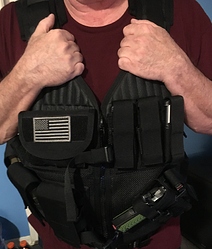 To put it bluntly…no, that’s not quite what I was saying. I was pointing out things you should consider when selecting a home defense firearm. While the 9mm may not penetrate as many walls as the 40, it still will penetrate and you need to know and understand that. Firing a 9mm in your home at a suspect will never be safe. A 9mm can penetrate several standard drywall walls so you need to be cognitive of where you’re shooting so any missed rounds don’t find their way to unintended targets.

With regards to a 22…I have personally been shot by a .22 and i was still able to walk over and slap the hell out of the idiot who shot me (accidental…and long story). So I personally don’t consider a .22 a home defense weapon. That’s not to say it can’t kill or BE effective, only that your shot placement has to be exact in order TO be effective and in a home environment…that may not be an option.

My personal feelings are that you need to have a firearm you and your wife can BOTH effectively fire and hit the target. Learning on a .22 is perfect. Once she gets comfortable I would most definitely suggest finding a small 9mm that fits her hand well and that she can wield with some accuracy. If that’s the ruger then great…if not then find one she feels fits her and that she can grip well and get her that. I’ve found that with my wife, her grip strength was weaker and we needed to find something that fit her hand better till she was able to increase her grip strength and could wield larger sized pistols better. There was a lot of trial and error and I bought several new pistols “for her” that quickly became mine when they didn’t fit her well. Not that this was EVER my intention…just worked out that way

I’m sorry if I sound gun dumb. For the record I’ve been around guns all my life. My dad educated me on the gun laws, embedded them in my head. So how to handle and treat them I’ve got that down. It’s everything else that I have to learn. Until now I’ve never owned one. So I’m sure to some of you I sound gun dumb. That’s why I’m here at USCCA, to learn. I thank all of you who have not judged my lack of knowledge. I appreciate everyone being so helpful.

Justin…there is no need or reason to apologize!!! education is always preferred over ignorance! I will answer any question you have if it helps you.

I’m sorry if I sound gun dumb. For the record I’ve been around guns all my life. My dad educated me on the gun laws, embedded them in my head. So how to handle and treat them I’ve got that down. It’s everything else that I have to learn. Until now I’ve never owned one. So I’m sure to some of you I sound gun dumb. That’s why I’m here at USCCA, to learn. I thank all of you who have not judged my lack of knowledge. I appreciate everyone being so helpful.

I wasn’t being a smart Alec when I said both. Depending on number of intruders I want choices. 1 guy, pistol should be enough. 2-4 guys shotgun “should” be enough. More than 4 I’m going for AR.

Brother we at the USCCA are here to help you and not judge you. There are a lot of knowledgeable people here and all are your family. Sometimes we have to rely on GOD to put things in there place but you will eventually reach your goal as far as knowledge, wisdom and understanding of firearms.

Thank you for that Johnny and God bless

There are several variables and they all depend on the answers to a few questions. Are there children that could access them if they are in a nightstand or under your bed. If so you can get both a long safe for under the bed and a small safe for the nightstand. My pistol is in the nightstand but with a great trigger lock that works with a biometric release. It is identilock, I am very happy with it. I also keep the shotgun in a safe under the bed made by Fort Knox that is a mechanical safe. This is imperative if any children will have access to the area.

As for the best weapon I would say for the average homeowner that does not have any regular training or practice, the shot gun would be the go to weapon. The reason is that most who have not been in the military or had police or other training are not familiar to what adrenaline will do to your small motor control. If you are in a life or death situation, the adrenaline pumps and that gives you the fight or flight reflex. It makes aiming a gun and using the sites a lot more difficult than being at the range. You lose the ability to make small, fluid muscle movement. Your vision can become tunnel, there are many things it can do that will make a pistol harder to aim than a shotgun. It is hard to miss with a shotgun.

We have no children in the house. My tactics would be different , if it were other than my wife and I.

Shotgun if loaded right is a real cannon. Even Birdshot will cripple or kill a invader at close range and with little over pen. I got small game and military 00 buck. But its still my pistol thats the go to.

The other thing about the shotgun, the neighbor does not have to worry about being hit

E gadz, that’s a tough one. Lots of things to consider. As some have said and written, behind every bullet is a lawyer. We are responsible for every round fired. That’s especially true in anti-2A areas where criminals are coddled and given more rights than victims. If you have the luxury to choose, then I’d say an AR-15. I only say that because of my experience where I almost had to use my shotgun against 3-4 ex-cons; one was about to break in from behind. I thought about the aftermath of that incident for an entire day the next day and what would have happened to me. I then called USCCA and enrolled, which is something I had been putting off for several years. I live in an extremely anti-2A county. A handgun would have been more effective for multiple potential attackers IF they had been armed with guns, but an AR-15 is probably better for that kind of incident. A handgun isn’t as powerful as a rifle, and it might take more than one shot to stop just one threat. Now imagine being faced with more than 3-4 threats, all hardened ex-convicts who belong to a gang that specializes in home invasions (as the ones that I encountered). A shotgun definitely has more stopping power. The only concern for me when I had my shotgun pointed and ready to fire was a potential homicide–the perpetrator(s), not me. A 12-gauge shotgun with #1 or 00 buck is definitely going to stop someone or several people. And the need for follow-up shots per person won’t be necessary if I don’t miss. But I later thought about how an AR-15 is quicker and more effective in follow-up shooting compared to my pump-action shotgun. Plus, over penetration is a huge concern since I live in a peaceful suburb with 2 homes behind, one on one side of me, and several in front. On the other side is a park which even though is across the street, the potential of a stray bullet hitting someone there is still worrisome. Children, teens and elderly usually visit that park. So we have to think about other very important factors besides what’s more effective in immediately stopping a threat.

Have you ever heard of a 30 round mag for your hand gun? Besides the fact that your 5,56 round is going down the road into your neighbors house