You were correct sir. Smashing response to the arguments that CC should only be permitted to cops or require mandatory training. 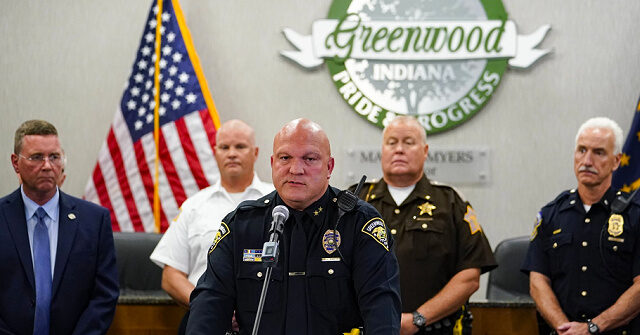 The 22-year-old man who shot and killed the would-be mass shooter at Greenwood Park Mall was armed because of "constitutional carry."

It’s a sad reflection of the times.
Due to “wokeness” and political agendas, a person who acts heroically is instead being villified by the liberal media.
And yet people like Megan Rapinoe get a Medal of Freedom…

I truly fear for this country and the continued downward spiral…

If liberal democrats’ response to this incident still does not make people question their blue votes, nothing will for the hopeless sheeple.

Makes one think about value of earthly rewards and vanity, doesnt it.

ok On Tuesday, the coroner’s office released details from the autopsy reports. In the report, the coroner said the shooter sustained eight gunshot wounds.

This guy had balls.
I personally would be more thinking about my misses than hits.
Again… kudos to Mr. Dicken

I’ve been installing several license plates readers and recognition systems… but so far none of them stopped anybody from shooting other people.

He did a lot of things right, including stabilizing himself and/or his pistol against a pole. 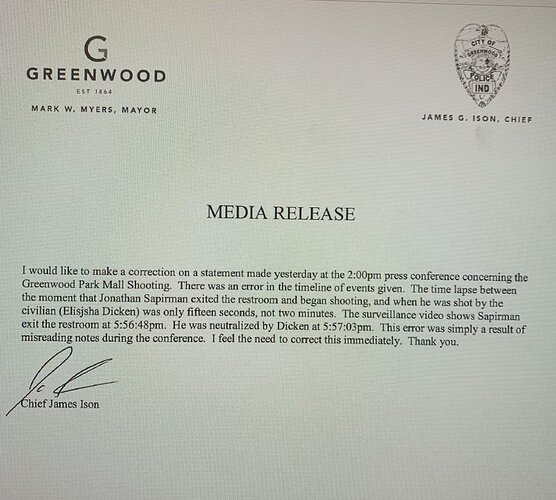 After all is said and done about this incident, I have come to one undeniable conclusion: I need to start training harder at distances beyond 7 yards. 10 shots with 8 hits at 30+/- yards, under stress. That’s some real shooting. Time for me to move the silhouette out a ways.

No Kidding, my EDC is a compact, pretty tough to accurately get out past 20 yds. Right now my shoot circle at 25 yds is about 10" diameter and that’s not under any pressure.

My next trip to the range will include me taking my full size silhouette out to the limits of the pistol bay–somewhere between 20 and 30 yds–and we’ll just see what my “shoot circle” is. I have three choices for shooting: a 3.75" barrel, a 4" barrel, and a 4.4" barrel.

Could not have said it better myself. Colin - you know your stuff!

This is news to me:

One of the people shot to death by a gunman at Greenwood Park Mall in Greenwood, Indiana, Sunday was carrying a handgun that he never had a chance to pull, Greenwood Police Chief Jim Ison told WRTV.

Victor Gomez was walking in as the gunman was exiting a restroom near the food court when the suspect, [Jonathan Douglas Sapirman], shot him to death.

Gomez was the [first of five people] who the suspect shot. [Three] of them died.

Police later found that Gomez was carrying a handgun. Ison said Gomez had no chance to pull his gun and defend himself. 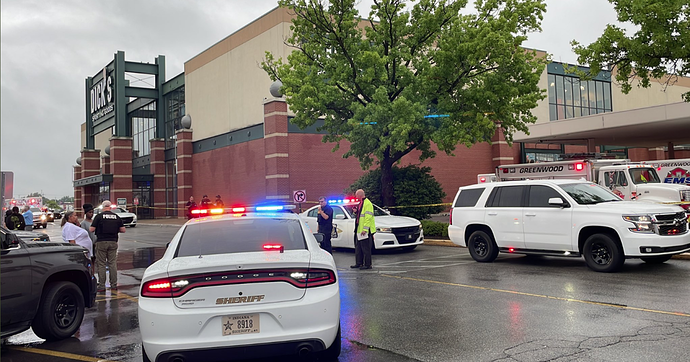 That might be something that situational awareness could have avoided, and it might not be. Sometimes you just can’t avoid some things. Sucks.

But, Indiana is way up there in terms of % of the population licensed to carry (a less relevant stat now that so many states have Constitutional Carry). It does not surprise me that at least two people there were legally armed.

The USCCA map says 16.7% of the state has a license to carry a handgun

True. We’re not aware we put our guard down until after we’ve noticed it.

And sometimes even guard up, not everything can be seen and avoided, especially public spaces like a mall.

Nope, he never had a chance. Have you ever tried to draw the concealed handgun against firearm already drawn? Mr Gomez was already dead the moment the psycho decided to shoot him.

Have we learned what the good guy was carrying yet? I for one would like to know. Regardless if what he used, it was some damn good shooting and situational awareness.