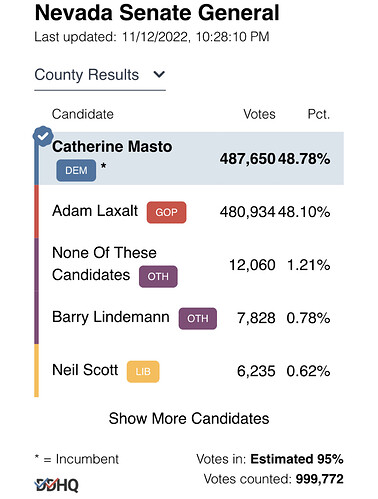 How about when it’s all said and done, we call it a year of our discontent and have a six pack?

You know not to take me too personally or too seriously! I admire all your content, and you’ve surely seen my hyperbolic rhetoric! In this case, it was seriously a red trickle! I expected a timely vote counted and a true win! My bad, I thought after the usurping and ballot harvesting we would have fixed it all.
We can’t change anything if we /they don’t exercise our will.
Who votes for murder and rape in their cities, could I be missing something am I on the wrong side? How exactly does a Pro crime Hochul and a Fetterman actually make it into governmental offices? I absolutely did not vote for emptying prisons!
Are a majority of people into crime, death, overdoses and the highest prices in 40 years?
My solution is card carrying conservatives pay what we voted for and everyone else pays what they voted for. Dems want $16.00 a gallon gas, more power to them, me I voted for the $1.98 a gallon. It applies to everything going wrong, you don’t want to be thrown under a train, present your appropriate card!
And what exactly is the difference between me shooting a democrat in the head and calling it a late term abortion, that was their mothers choice? It’s just too looney!
75% of people think the way things are going it’s all screwed up yet 50% of the country voted to keep on the same track??? What am I missing?

Someone once said it’s not how the votes are counted, but who counts the votes!

I’m not taking you personally, I think that we need to wait. This just came out.

I never believed in the polls, but I gave humans the benefit of the doubt when it came to right and wrong!
Brandon’s government hurt the people physically and psychologically!
A President works for the benefit of his people and country, traitorous leaders intentionally hurt their citizens!
If it wasn’t intentional, then it’s sheer mental deficiency! That’s 25th amendment worthy!

If that was to happen, we would have Kamala Harris as President.

If Joe was younger, I would say he chose her specifically to be his VP for exactly that reason. To ensure no one would use Amendment 25 against him.

A President works for the benefit of his people and country, traitorous leaders intentionally hurt their citizens!

This is exactly where I have the problem. I get it, you make a mistake, it hurts the economy, you fix it and move on that’s “works for the benefit of his people and country”. However when you continue to make policy decisions and sign Executive Orders that have negative impact on the citizens wealth, well being and liberties, like this administration seems to keep doing, you are “traitorous leaders intentionally hurt their citizens!”. Then you look at the outcome of the last election and have to ask, how far down this rabbit hole have we all ready gone?

Our state is the same way. They took all the taxes away from our gas and we are sure they will make up for it know.

I’m with you! We get treated like dog crap until they want to start a war somewhere then send us in with no way out. Been fighting the VA for over 10 years and even with them admitting they failed in their “duty to assist” I STILL have heard nothing.

I sent the Dept of VA a statement they were making me homeless and sent a link to the homeless veteran line what was it 2.5 billion for student loan forgiveness my body looks like a map most days so much pain I just feel like screaming THE DON was right the swamp needs cleaning of crooked politicians and holly wood child traffickers put them all on a bus and send them to Gitmo

I am still amazed that no one in our government has suggested, what I humbly believe is the answer to the student debt issue… REMOVE ALL THE INTEREST and just have the student or parent that’s paying the loan, make equal monthly payments over a set number of months (years) until the actual amount borrowed is paid back… It’s the INTEREST that gets so many folks in trouble should they miss or are “forced” to spend on more vital necessities at a given time. Does someone pay the loan amount due or eat? There should be some forgiveness for a late payment or two instead of our government forgiving the entire loan and adding trillions to our debt… hurting these very same students even more in the future. PLEASE BRING BACK COMMON SENSE…

I was very naïve about how much a trip through the VA could cost. I was even more surprised that my government-sanctioned insurance didn’t cover VA visits.

I’ve met some great people who work at the VA, but the system will chew you up and spit you out.

have went through every step even showed where I made more than what I was receiving in September not counting they had took another 1100.00 in February so I mean barely surviving

It’s the INTEREST that gets so many folks in trouble

This debacle on student debt though. Is a direct result of a 2005 Republican law. The Bankruptcy Abuse Prevention and Consumer Protection Act was enacted in 2005 to include private student loans as one of the 10 debts that can’t be forgiven. 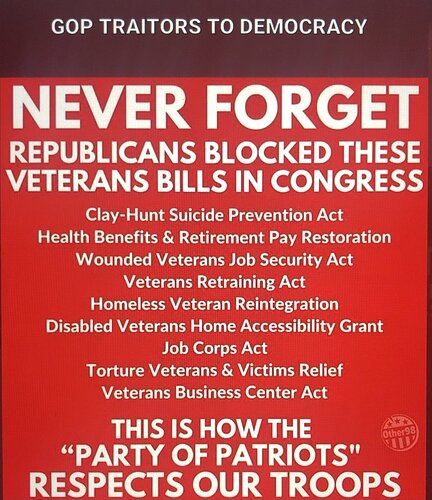 As a party we really have to change. Add in Citizens United and that is why there is so much dark money in play for elections.

If we really want to change things we have to repeal Citizens United.

What is Zavier talking about?

A conservative nonprofit group called Citizens United challenged campaign finance rules after the FEC stopped it from promoting and airing a film criticizing presidential candidate Hillary Clinton too close to the presidential primaries.

A 5–4 majority of the Supreme Court sided with Citizens United, ruling that corporations and other outside groups can spend unlimited money on elections. Overturning 100 year’s worth of precedent that restricted how much money could be donated.

Zavier,
Thank you for this eye opening reply. I must say that I was not aware of these startling facts you list here.
The Republican Party is in need of a major overhaul. As a Veteran who served way back in the mid 70’s, I find this information very disturbing.
Take care of yourself and your family. Have a great Thanksgiving.
Don

If memory serves, the Republicans voted against many of these based on How The Hell You Going To PAY For All Of This? I can’t say I disagree.

I hate to be “that guy”, but it often feels like there are larger “forces” in control behind the scenes of our government, and conservatives barely taking back the House seems like a bone thrown to appease and quell the growing anger and frustration of conservatives (and others?) who are paying attention to the increasing power of the federal government. Perhaps when “they” have secured sufficient power all pretense will be cast aside and we’ll finally get to see the "man behind the curtain ". However it probably works to their advantage to allow the illusion of a Constitutional Republic to continue.

Yeah, and don’t forget how the sausage is made. A lot of stuff Republicans would support is packaged in with stuff they’d never support. Little pieces of pork are packaged together in 1,000 page spending bills. The party in power wins either way. Either they can entice some minority members to vote due to the extras they want to see passed, or they can stand up later and claim the minority members voted against some popular provisions in an otherwise rotten bill.

I’m not saying the GOP doesn’t need to adapt, I’m just saying to be wary of any time you’re told a politician voted for/against something, because it’s rarely that simple.