Sorry about that I kind of went on a tangent.

It doesn’t get any better than this. FYI, there is no “southern BORDER”, it’s a freeway to invasion. I personally recommend staying in condition “orange”, things are about to get real.
The wars between the cartels and ISIS- A,B,F,E,X,K are going to be awesome! You thought the small corner drug wars were bad, these opposing enemies enjoy 55 gallon drums of acid the other appreciates a good beheading and fire. The turf they will be competing over is the eastern seaboard, the great divide, etc, you get the point! Not the bodega on 5th and Racine!
All we can do now, is sit back and enjoy the emperors games!
The question of the century used to be, why is the sky blue? The new question is, why are our own people trying to kill us by proxy?
Never thought my golden years were going to be so exciting, now I know how the Romans felt at the coliseum! Who needs fishing eight hours a day? We have true gladiators and savages and the United States is their coliseum. Hope they throw some bread my way!

Its very interesting that Democrats view White tax paying Conservatives who are not taking the vaccine, question the need for masks, and believe that Trump may have had the election stolen as TERRORISTS. However Afghan and South Americans entering the Country illegally and without being tested for COVID are no problem at all, and don’t even merit tracking!

Same for conservative minorities. We are seen as a danger as well, which I experience often in the black community. Also look at Cuba which the “powers” at be know are conservatives trying to flee and would vote republican in the US. That is why they haven’t given aid from what I understand. This is real life good vs evil in the flesh imho.

This may be uncomfortable to a lot of people but it is truth. The American Indians (native Americans, indigenous people, etc. whatever your safe word is) were CONQUERED. America was born like ALL nations on the face of the earth were born by first CONQUERING the people who are there. Right or wrong this is how nations are born and/or transformed.

Humans have been killing each other for three hundered thousand years, since the first two clans met under a fruit tree on the plains and we always will. We will always revert to “survival of the fittest”.

It’s being done in Afghanistan today.

Even Native Americans were not above enslaving captives from other tribes. 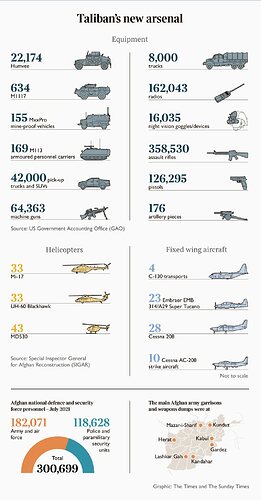 But! But! But! A spokesmen for the Pentagon just this morning said, the equipment left behind was rendered inoperable???

Feed us BS and tell us it’s caviar