The FBI released their report on “Active Shooter Incidents in the United States in 2020”. This appears to now be a yearly report. (link to previous reports)

The CURRENT FBI Active Shooter Report, for all 2020 incidents: 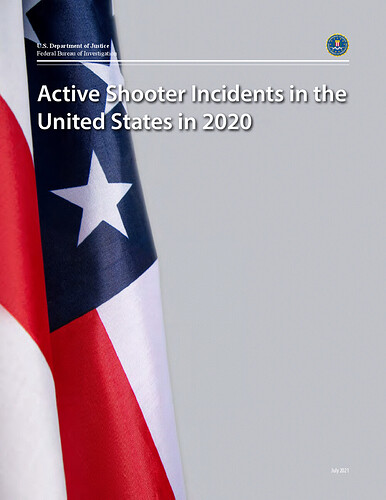 Active Shooter Incidents in the United States in 2020 | Federal Bureau of...

The FBI has designated 40 shootings in 2020 as active shooter incidents. The FBI defines an active shooter as one or more individuals actively engaged in killing or attempting to kill people in a populated area.

For those that aren’t aware, the FBI Active Shooter Incident reports use the criteria that I think most people would agree is the real definition of a mass shooter. Someone whose intent is to kill as many random people as possible. Shooters such as Parkland HS, Aurora Colorado movie theater, Las Vegas, etc are typical examples. This is in contrast to other sources (such as the Gun Violence Archive) who may use an arbitrarily chosen number as a threshold, for example “more than 4 people shot is a mass shooting”, and predominately include gang activity and domestic disputes. The FBI definition uses intent to cause harm and will include an incident no matter how many or how few deaths occurred.

The official FBI definition follows in part, and can be seen in its entirety on page 2 of the current report:

The FBI defines an active shooter as one or more individuals actively engaged in killing or attempting to kill people in a populated area. Implicit in this definition is the shooter’s use of a firearm. The active aspect of the definition inherently implies the ongoing nature of an incident, and thus the potential for the response to affect the outcome.
…
When evaluating shooting incidents to determine if they met the FBI’s active shooter definition,
researchers considered for inclusion:

This report does not encompass all gun-related shootings. A gun-related incident was excluded if research established it was the result of: