I heard this one today,

“All you need to do is drop the mag, then you can’t shoot anyone”.

I ask “what about a round in the chamber?” and got the WTF look from the gal. I just didn’t have the energy to try to educate her, my bad.

You asked the right question. If she can’t figure out the answer on her own, then she probably wouldn’t remember it if you spoon-fed it to her.

I’m picturing the look.
Some folks are too dumb to realize how dumb they really are.

That’s a good point. My wife has a Ruger, but I wouldn’t be comfortable treating it as unloaded knowing that there was a round in the chamber, even though the trigger is locked without a mag inserted.

“All you need to do is drop the mag, then you can’t shoot anyone”.

Neither of those seems like a sure fire way to keep innocent people from getting shot. Even if my handgun had a magazine disconnect I wouldn’t trust anyones life to it by recklessly treating it like it was unloaded.

I would also not personally carry a SD pistol with a magazine disconnect. In a physical struggle the magazine could get disconnected and your gun with the bullet in the chamber that could save your life suddenly becomes a rather small club. Plus if you decide to make a tactical reload during a lull and the situation suddenly changes you are in the same boat till you can get the new mag in.

A magazine disconnect feature does not allow a user to fire the gun when the magazine is withdrawn (even partially) by means of a mechanism that engages an internal safety such as a firing-pin block or trigger disconnect.[2][13] An early example of its use was in the Browning Hi-Power pistol.[14] As with any firearm feature, there is debate regarding the necessity of a magazine disconnect. Historically, most magazine-fed firearm designs had no magazine disconnector. There are exceptions, notably Ruger rimfire rifles and some of their newer handgun designs, and the U.S. State of California passed legislation in 2006 requiring magazine disconnects on all new handgun designs sold in the state starting January 1, 2007, which has resulted in their widespread availability in other jurisdictions as well.

For the rest of the article see
https://en.wikipedia.org/wiki/Safety_(firearms)#Magazine_disconnects

According to Guns.com, for a gun to be on the California approved handgun roster:

According to Guns.com, for a gun to be on the California approved handgun roster:

Any center-fired handgun manufactured after January 1, 2007, must have both a loaded chamber indicator and a magazine disconnect mechanism

That only applies to new designs not already on the CA roster. You can still get newly made Gen 3 Glocks in CA.

Pretty sure new designs after 2007 also have to have a not yet invented micro stamping firing pin which is why there are no new designs on the CA roster.

Context? I think the conversation was about how to not get shot by the police.

Don’t think the cops are going to notice if you have the mag in the gun or not when they come running in. Seems like a much better idea would be to just drop or holster the whole gun.

Context? I think the conversation was about how to not get shot by the police.

Mike, you are the OP, and the context you set is someone thinking all handguns have a magazine disconnect safety. (Some do, many do not.)
How to not get shot by the police might be in a different thread.

How to not get shot by the police might be in a different thread.

Ah, we’re playing the oldies, now.
How to get shot by the police

Reminds me of my ex brother in law when he was young. “How can I be out of money? I still have checks”

So I’m advising everyone here that if you slightly depress the magazine release on any of the “won’t fire without magazine” guns it WILL FIRE if there is a round in the chamber. I’ve practiced just in case magazines are all gone. It takes a fine finger to get the release button to think it has a mag under it.
Hope this helps, the lady in question was probably responding with the knowledge she had gained, not her fault perhaps, some people learn at different speeds. Also perhaps she was taught by a know-it-all who only thinks he knows, loads of those out there.
One other way to stop multiple rounds heading your way if your close enough is to grab the slide firmly, only one round can be fired, by holding the slide you create a malfunction. Hopefully the first round didn’t hit you. Now you have a split second to disable the threat. Btw, I don’t recommend anyone trying this technique unless completely trained. I’m USMC trained and if a perpetrator enters my domain, and is within reach I’m grabbing that slide, this prevents the perp from potentially killing my family with multiple rounds. Also I can easily break the wrist using the added leverage the perps gun offers.

Still, get a dog! Best deterrent ever.

I must admit. I did not know that a magazine removed would not allow a weapon to discharge. I also didnt know California made such a law. Then again, California is not where i reside and the tyoe of weapons specifically mentioned are not the ones I am familiar with. That is an interesting comment. Brings the awareness of what one is familiar to in order to comprehend a comment/statement and its reference of…

I did not know that a magazine removed would not allow a weapon to discharge.

Just remember that is not a universal rule. Some guns have such a lock (FN HiPower 9mm) and others do not (Springfield SA-35 HiPower-style 9mm). 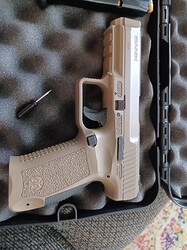 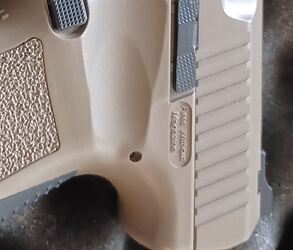 Noticed this one yesterday…

Older Beretta 92 FSs go bang without a magazine. Not sure about newer ones.