Well with all the illegal stuff going on in Seattle, the taking over part of a city and making it a foriegn country, the drugs, the rapes, the murders and so on. Is SUPPOSEDLY going to be taken back and all I can say is that the mayor, governor and the police higher ups need to be replaced.

After the most recent shooting, they refused to let the police secure the area so that the ambulance could come in. They won’t go in until the area is secure for the simple fact that it could be a trap, just so that whomever could “JACK” stuff off them and maybe even kill them.

The days may seem like a hippy commune, but the nights are like a warzone there. The national guard and even the full blown military should have been given the green light to take back the streets right after the 2nd day.

It is imploding under its own weight, or rather lack of security. From my intelligence sources, most of the true believer protesters have moved out and what is left is what amounts to a massive homeless camp. So, why is there not more coverage of this? I have my ideas, but I will leave it as an open question. 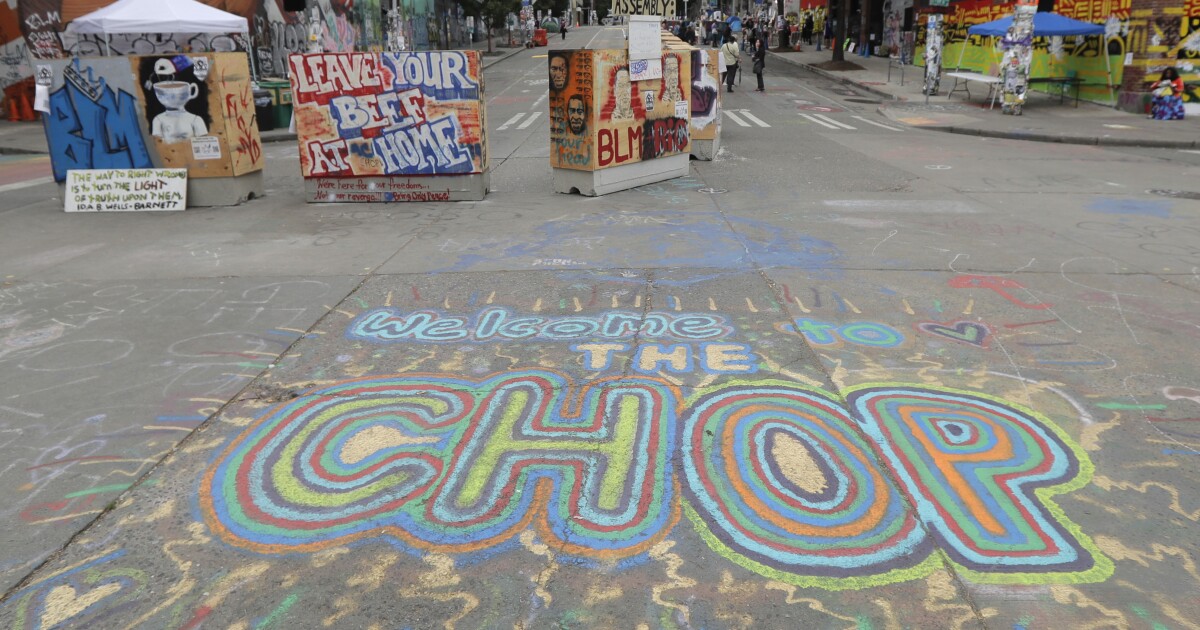 How desirable is this real estate? What is the chance this CHOP is a corrupt effort to get owners to sell cheap to the interested parties?

Anyone here ever mow a field and watch all the mice, snakes, and other vermin spread out into the surrounding area, or start finding rodents where they were not before???

Best to keep 'em in place and deal with them that way.

That’s an interesting theory and could quite possibly be reality

If you read a bit more, the “official” CHAZ/CHOP people, aka Raz, did not stop the police or medical from entering. Just all the “non-official” did. So, passed the buck so to speak. I heard that one of the people shot is going to sue the city because they did not come to their rescue.

That area, in general, is very much like Haight-Ashbury in San Francisco. During the best of times I would compare it to a peep show…

Local businesses are filing law suits against the city. The local news are reporting interests in the Chop zone but do not cover much because the area is not ran by a certain group or person. This makes it hard to make any grounds for “negotiations”. The Mayor and police Chief has requested people to leave and that they are going to come in sometime, but no one knows when. There are a few that are enraged with that and said, Good Luck!" A fight will commence.
The vandalism that has been done is unbelievable. The people who live in this area are scared. The businesses in this area are at a loss. There seems to be nothing good coming out of this so called protest area. Even the protest seems to be losing its purpose.
It will be interesting to see what comes of this. I live 35 miles away and I avoid Seattle as much as possible with or without all this drama. I usually go to Pikes Place Market once a year to shop for food items and see what new food trends are happening or get ideas for dishes to prepare, I am a chef after all.

chop goes to the trash heap of history

I see that the higher ups really haven’t done what they said they were going to do and swiftly take back the area. No surprise there, but yeah CHOP or CHAZ, whatever you call it is a bigger flop than screen doors on a sub.

Socialist commune is a flop? Unbelievable

“Summer of love” my foot.

I don’t know how I would prefer to see it handled. A strong-arm federal response raises fears of military rule. State/local police action early on would feed leftist narrative. Police action later with no federal intervention resulted in multiple people victimized by criminals, portrayed authorities as weak, encouraged more attempts of “autonomous zones”.

I believe the second option (state/local police) is correct. I also don’t care about the left’s narrative. To me, the louder they howl, the more certain I am that something was done right.

I think we saw a little of all those responses in the last few weeks. CH## took the local response with the attempt to support and appease the “protesters.” Local authority wanted no federal response or aid despite repeated offers to step in, but federal response is not allowed without request by state and local authorities. This is where we see the differences in response. So, while we might be sickened at the thought of an autonomous zone, it lands in the hands of the local officials, just as the crime and lawlessness is on them. Meanwhile, take a look at Washington DC and the attempt to set up BHAZ (Black House Autonomous Zone) in DC on Federal land. The response was quick and swift. Those who attempted to establish a second AZ (as you note the emboldened factor) were never allowed to gain a foothold in an attempt to seize property. Take note on how much we have heard about CH##, the crime, the conditions, etc along with the mislabeling by politicians (summer of love ex) in an attempt to pander. Best response, dont let them gain a foothold. Its a lot harder to dislodge them once they have established what might be called a home base. The chances of things turning south on both sides goes up exponentially.

That said, I know there is more work to be done, but I am glad to see that CH## is for all intents and purposes, over.

I, for one, will never refer to CHAZ by its subsequent name.

It’s funny how people inside of Chaz are against borders…yet had borders and only certain individuals were allowed in. It sounds fairly similar to a topic they’re strongly opposed to. Weird!

@Danny10 Well said, and I am just a one or two degrees left of center