Can anyone verify this?

What is the claim, exactly?

The only time death should be considered is when there is no other way to stop the enemy from taking innocent lives.

I could find nothing to corroborate his story, I think it’s fake news just to stir up trouble.
Flags are hung vertically all the time inside and outside buildings.

General Guidelines for Displaying the Flag:

How were flags used in battle?

In battle, flags served as a rallying point when a formation was broken. Troops gathered around the flag to regroup, attack or retreat. Flags marked specific individuals, locations and functions such as hospitals and ambulances. Infantry regiments regularly held trooping ceremonies.

I think it has more to do with the fact that the stars are missing.

Still call it photo shop B.S. I watched the rally entrance and no flag displayed, if he had done something so stupid it would be on all the news channels. 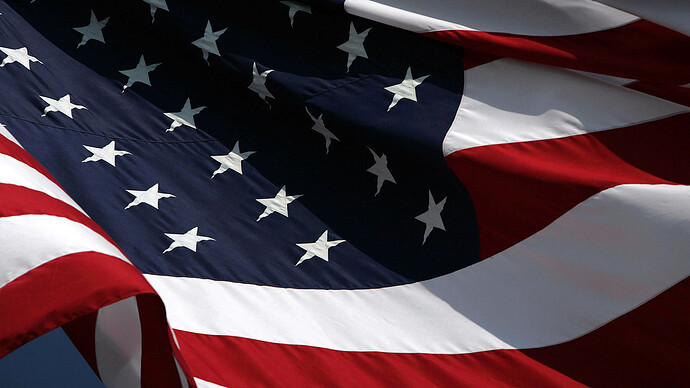 No stars and stripes? Reimagined US flag sparks outrage

Should the American flag be changed? The New York Times recently published an opinion essay on the flag with reimagined designs for Old Glory, and it has raised the ire of many.

There is a “black colored” version of the US Flag, that if it is being displayed means “No Quarter” used mostly by civilians.

However there are times codified in the Geneva Convention that it is appropriate to fly a “No Quarter” flag. For actual Government militaries to fly that flag.

"The black American flag was born during the American Civil War, which lasted from 1861 to 1860.

It was the deadliest war ever fought on American land. This war claimed the lives of over 600,000 people and leftover 400,000 people missing.

During the war, soldiers from the confederate side used a black flag instead of the white surrender flag.

This flag meant they would neither withdraw nor surrender. It also meant ‘they will give no quarters".

The blue in Kuo’s design stands for “untapped potential,” the yellow for “repairing system racism” and the green represents “taking care of our planet.”

1Another, by design agency 2×4, which stated that the U.S. flag “has been made and remade” over the years, is a blurred color design in which “the familiar symbolism falls out of focus.” Yet another, titled “Lift Every Voice and Sing,” is a collage of several flags, including “Black Lives Matter” and “Progress Pride.”

Aint this cute?
Unfortunately for these progressive artists, there are already 2 winning alternatives to the current US Flag. One is solid green, with a picture of scimitar and Arabic text. The other is solid red, with big gold star, and some little gold star around. It is strangely identical to the PRC flag. Which one is prettier? 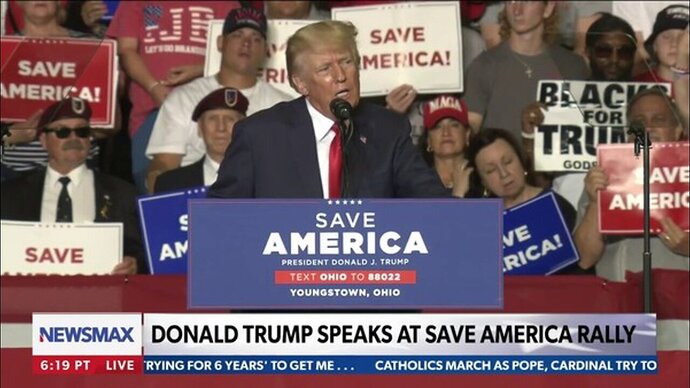 Former President Donald Trump speaks at a Save America Rally in Youngstown, Ohio.

Yup, that’s what it looks like. Thanks. I still never found a use for this flag in the Marine Corps or anywhere other then the article above. As I said, if what jo140 says was true, the news agencies would be screaming. We shall see.

AS A COMMUNICATIONS SPECIALIST IN THE MARINES

don’t we have Marines here who could confirm what has been claimed?

There were no stars on the flag last night as President Trump entered and exited the stage. For those who don’t know what an American flag without the stars means you have to ask someone whose been in the military. The simple answer is surrender. American flag without the stars tells your enemy that further aggression on their part will mean total annihilation, complete destruction or obliteration, If your the enemy and you choose to surrender you be treated well. President Trump was sending deep state a message.
No Stars on the Flag (ussanews.com)

How is the enemy supposed to know this? Cause people who have served have no idea. Not to mention this is against Geneva convention, not to mention, military terms used for civil discord. You know who posts garbage like this?

I have found many articles in news that’s targeted towards Conservatives that was crafted to inflame and outrage. Further full readings of such articles would have information buried down at the very bottom that clarified it and, gave you the missing information that told you the outrage you started out feeling was misplaced.

I fully expect that the left is sewing false outrage and false aggression into conservative information streams to further confuse things, and get people to overreact, something they stand prepared and loaded to take full advantage of and use as an excuse.

These are some of the most dangerous times I think I’ve ever seen for the nation the founders built, shy of the first desperate conflict they risked establishing it in the first place.

All I know is tyhat through out History many soldiers died to keep the flag from hitting the ground,we were taught that the flag NEVER touches the ground, and I heard that if the flag hits the ground that it is a sign of surrender/defeat,at one time the British ships tried to blow the flag down at a fort,but found out that there was a stack of dead soldiers holding it up!At ONE time the flag was respected to the utmoast

Not to mention this is against Geneva convention

There are numerous times when flying the black and grey American flag ( historically the No Quarter flag) where it has been considered appropriate.

My source for these instances is a senior officer (whom I have known for years) who teaches classes for senior officers at the War College @ West point.

The Geneva Convention is a pretty brutal book when you get to reading it and some of the punishments laid out.

For example if you get caught fighting the Opforce in Civilian clothing behind enemy lines you can be summarily executed as a spy.

who teaches classes for senior officers at the War College @ West point.

My understanding is Geneva convention is rooted in 30-year War, which caused 50% population decline in some parts of Europe. Avoiding mutual atrocities suddenly was a virtue. Solid separation of combatants and non-combatants was a part of this. As well as punishment for blurring the line.

At any rate, this is all history books. Using military terms and suggesting a legitimate peacetime politician views his opponents as military foes is a total smear. It is reprehensible. Whoever posted - and none of us have a clue about these folks identity, right? - nice try.