“The cynic in me contemplates the possibility that this was a cleanup action intended to showcase El Paso in a particular light and the president’s enforcement actions in a particular light,” said Graybill. “I think the irony is that what you see in this video, what we’ve been told by our partners on the ground, that is in direct contraction to the kind of reasoned and sensitive and law-abiding proposals that he made at the beginning of his administration about respecting areas like churches and organizations that are providing social services. So it’s a really painful contradiction.”

Nothing to see here folks, move along…

Now the Biden Administration can say “We are doing something at the border”. Not like slowing crossings, catching Fentanol mules or vetting those that would enter our country, nope none of that. What they did was, well, go down there for a photo op with a sprinkling of blaming it on the Donald.

Now the Biden Administration can say “We are doing something at the border”.

Seeing as that’s going to be the protocol. You can now download an app and make a reservation for yourself at any checkpoint

First clue is he is going to El Paso, he will appear at a pre-“visually” sanitized and staged intake center with pre-screened “migrant applicants” . He won’t even visit the actual port of entry, may catch some actual sightings of drugs and arrest being made. Can’t have that. Should he go to Eagle Pass? Of course, but don’t hold your breath. You can’t pre-stage Eagle Pass.

I’ll be surprised if he leaves the airport.

A typical political s_ _ t show. Lay odds you won’t see people moving around. Be clean as can be.

And today in Texas.

I think he was carrying a MAGA hat when departing on Air-force One. Photos should be available any minute now! 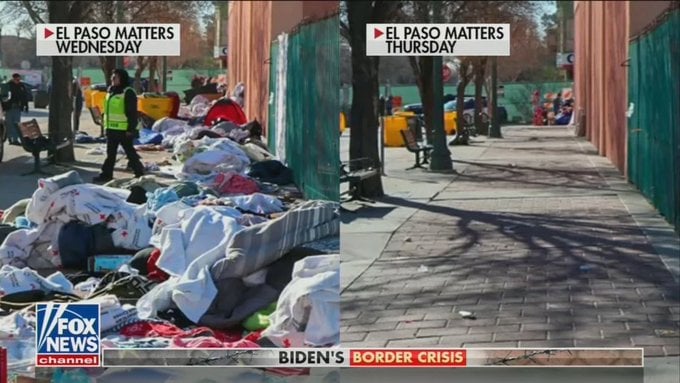 Joe Biden on Sunday will be visiting the US-Mexico border for the first time in his life at the age of 80. Biden is expected to be at the border for only 3 hours on Sunday. More than 5 million illegal aliens have crossed over the border since Joe...

Too bad the Governor didn’t step in and make sure the Head Jerk saw the reality on the border.

No point in that, he already knows the reality and is complicit in letting it happen unchecked.

And as usual Biden wont do a thing what a crappy policy!

What needs to happen with the mass migration at the border is the federal government (which can balance a budget or pick a Speaker) needs to hire more ALJs to process amnesty petitions in a timely manner. It is shameful that amnesty hearings are held years after the application.

We’re here from government to help.

The visit to the border was nothing more than a senior citizen’s field trip. “Dam it” I missed the Bus!

The border wall should be declared a monument. Donald Trump Wall National Monument!

Then you would have all the libs down there tearing it down because it was racist, like all the other statues and monuments.

Just like my GREAT- GREAT -GREAT Great-grandfather "Don Juan de Onate statue was taken down from northern NM. I guess I don’t blame Native Americans for it, He caused a lot of atrocities.

With vaporizing lasers mounted on top at 1/8 mile intervals.
Warthogs should patrol it at night.