For opinions and discussion

This is going to be a hell of a case. In the video you can tell that he was confused and looked like he was hallucinating. Drugs were probably in the mix here. I assume there will be a lot of protesting. The officer wasn’t trying to arrest him at the time he was just trying to calm him down. Well lets see what happens with this case.

When I see these videos, I often ask, Why is it so difficult for 3 healthy young guys with some level of training to gain physical control of an intoxicated person? Why do they need to use a taser? That said, I’m pretty sure the guy was not of his right mind. What he talked about and how he acted physically indicated something was wrong. Could it be the drugs in his system or head/body impact during an accident? When he headed out into the road he became a danger to himself and others, it was arguably the cops “duty” to keep him out of harms way. After that, it’s the fog of war, 3 on 1 fight. I thought the cops looked pretty restrained but then again it didn’t look to me like the guy was attacking them, he was just rolling around yelling.

This is going to cause a lot of LEO’s to quit their jobs nationwide. If you can’t detain a person with “please and let me help you” it’s futile.
The on scene officer did everything by the new book. He acted more like a social worker until the guy made his way into traffic!
We are slowly descending into chaos. In order for us to come back, we’re going to have to hit bottom, it’s not going to be pretty.

IMHO it did look like he was on something which can cause him to resist arrest or even act aggressively. When someone is under the influence of any type of narcotics they get strength out of nowhere and it may take more than 2 LEOs to subdue or handcuff an individual. I don’t believe the LEOs will get blamed for his death IMHO. Still more details to come.

Ok serious question. What would be the problem had the officer just given up. Ok he’s not complying, let him go, pick him up another day. Sorta like stopping a car chase? Then the liberals can’t blame brutality. Maybe he doesn’t die after being tased. Is that a fair question?
If it’s damned if we do and damned if we don’t, why try?

Because you will be blamed if he walks into traffic and is hit or dies from an overdose or a heart attack, you could have saved him and you didn’t.

Or let’s say the guy would’ve stepped out into traffic and got hit by a vehicle then the officer on scene would’ve been scrutinized for that. The media would’ve asked why didn’t the cops detain him and not let him go into traffic?

In that case in reference to both answers, which I appreciate, why are we putting our lives in the hands of the media!
Let’s go back to everyone doing the jobs they’re assigned to do. Media reports the news, LEO’s protect and serve. And everyone else stays out of the way. I’m still dreaming aren’t I. This is 2023.

Yes, you are Brother. Wait till Attorney Crump shows up.

And in reference to what killed him, it’s called “Excited Delirium”. The Officers kinda shoulda known this.

Excited delirium (ExDS), also known as agitated delirium (AgDS), is a controversial diagnosis sometimes characterized as a potentially fatal state of extreme agitation and delirium. It is typically diagnosed postmortem in young adult males, disproportionally black men, who were physically restrained at the time of death, most often by law enforcement personnel.[1][2] Symptoms are said to include aggressive behavior, extreme physical strength and hyperthermia. It is not listed in the Diagnostic and Statistical Manual of Mental Disorders or the International Classification of Diseases, and is not recognized by the World Health Organization, the American Psychiatric Association, the American Medical Association, or the American Academy of Emergency Medicine.[3] It is accepted primarily by the American College of Emergency Physicians.

Excited delirium is particularly associated with taser use. A 2017 investigative report by Reuters found that excited delirium had been listed as a factor in autopsy reports, court records or other sources in at least 276 deaths that followed taser use since 2000. Manufactured by the firm Axon, the makers have been involved in police training in its use, publishing of numerous medical studies which promote their product, and other promotional activities.[4][5][6]

Will that be enough to satisfy the media and the storm to follow or will the media succumb to its own “excited delirium”?
Our country is in a real bad spot! There doesn’t seem to be a solution!

@Scott52 I honestly think this is where we are headed, and it makes me sad.

My hope is that there are more patriots than tyrants!

there are more patriots

“Where’s one when you need one?” 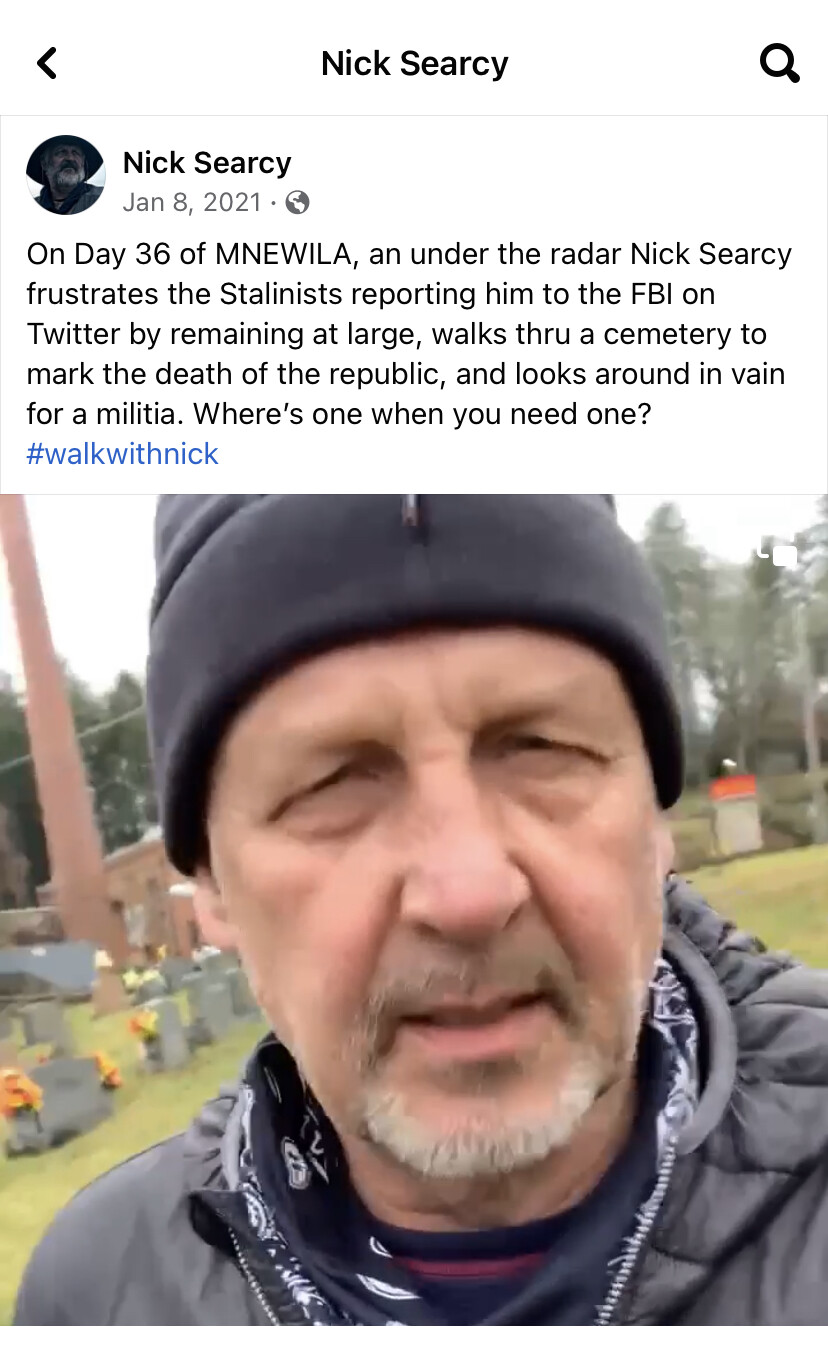 I totally agree, Mike.
Furthermore, any smoke and dust raised because of this, or his relationship will clear and settle, Ben Crump will stay in his office (because there is really no upside for him), and any subsequent complaint will ring hollow, and there will be no recovery in this case. That’s my non-lawyer totally unqualified assessment and opinion based on the video. Have a nice day.

This person/cousin obviously had a lot going on due to drug use and whatever other underlying conditions he may have suffered. His behavior in the video looks more like a schizophrenic episode.

While I respect Thomas Jefferson, he is wrong headed in this statement. Killing one’s fellow citizens, neighbors and people you disagree with does make the world better off. Just ask Russians how their revolution – in which more than 10 million died and put Stalin in charge – worked out. Or ask the Chinese how their revolution, which put Mao in charge, worked out. Or, ask how the Arab Spring worked out, surely the watering of trees with patriots blood would made the Middle East a better place.

I am well aware of history. I was responding to Scott. It wasn’t for debate.

Well one take away is that, as we already know, tasers do not always work. As to another poster’s comment about how it took three officers to detain him. One, it was clear they were trying hard not to injure him in anyway. They are only allowed to use enough force to detain. As you saw in the video, the officers were not breaking ribs or limbs, punching him in the head, etc.

Secondly, it is very difficult to cuff someone that does not want to be cuffed. My relative, now retired LEO, has related many stories about arresting people that resist. He was quite strong, his biceps like thighs of an average person, and his partner was quite a bit stronger. One story he related was their arresting a person in a stairwell. At one point after getting one cuff on, he just took the other cuff and cuffed it to the railing so that they could rest. He said the guy was surprised by that move. Eventually they were able to cuff him.

Has the body cam footage been released yet?