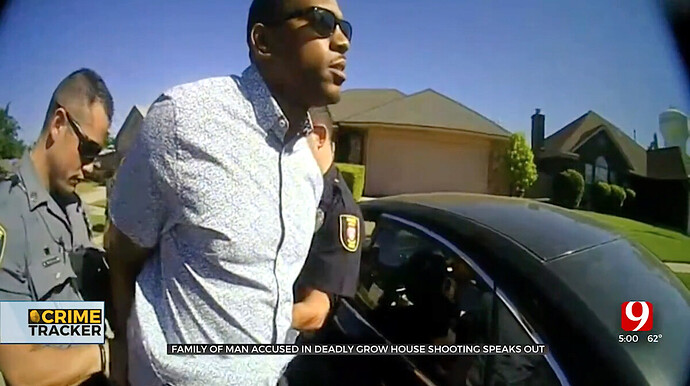 Prosecutors say Bratcher's medical marijuana business license had lapsed. Therefore, he was committing a felony, they say, when he shot and killed an intruder.

I am not so convinced this has to do with race…his licensing was lapsed even if it were due to Covid restrictions. Uscca insurance itself states, they say in their fine print “they do not cover those that are unlawful” which either he had no ccw or the legality behind his licensing not being updated. I have also seen many LEOs aggressively handle white men and women as well recently. Instead of pulling a racial card, I would have stuck with a self defense claim as priority. That is far more effective in the courts. I wish him well.

So they are treating this like being in a wreck with no insurance? You didn’t have insurance so you shouldn’t be on the road admission of guilt…
That doesn’t sound right.

I want to be careful that we’re not equating all the charges, here. That happens too often in high-profile cases where firearms are involved. Frankly, it happens a lot to black men. I’ve seen it here. A black man is killed, and people start dredging up unrelated events from that man’s past, as if it has any relevance to his death.

In this instance, Mr. Bratcher may face charges because his license expired. That doesn’t automatically mean that he committed murder. The article explains that a defendant may face 1st degree murder charges during the “unlawful distributing or dispensing of controlled dangerous substances or synthetic controlled substances” — “regardless of malice.” That doesn’t mean that Mr. Bratcher can’t plead self-defense. He was still occupying a building that he had a legal right to be in- either owned or rented (article doesn’t say), and someone else was trying to gain illegal entry. Take the drugs out of the equation, and this looks like a self-defense case. Mr. Bratcher obviously thought so, since he’s the one who called the police.

I assume that a lot of Mr. Bratcher’s future depends on his legal team, both for the pressure they can mount on the prosecutor and the case they can make to a jury. And maybe the prosecutor has the law (as written) on his side. And maybe some of us here will shrug this off as the price one pays for getting into the drug business.

But as 2A supporters, I think it’s dangerous to rush to judgment when officials argue that some citizens have no right to self-defense.

Ok so he can plead as he wishes. Cannot take the weed out of the picture. No license. In a building used for selling the weed. This whole story is a problem. I do wish him luck for defending himself & what’s his

Sad that race has to be emphasized in the report and the defendant’s wife also raised the race issue.

It unnecessarily distracts from evaluating the legality of Bratcher’s actions and situation as a business owner. Hope the jury looks only on the facts of the case.

Only other thing I find of concern, “ prosecutors argued that her husband — the defendant — was a “threat to the community” because of his Army combat training.” Whoa! If accurate, that’s discrimination against those who serve/served.

That doesn’t automatically mean that he committed murder. […] I think it’s dangerous to rush to judgment when officials argue that some citizens have no right to self-defense.

Even without a murder charge, he is facing a very long prison term for the illegal drug crimes. The reason for the murder charges are two-fold, we have read of many prosecutors charging a victim with murder in clear cases of self-defense, solely because they want to punish firearm owners anyway they can. The other issue is that the laws as written make homicide during a felony a murder charge. When one is actively committing a felony, one cannot claim self-defense. Lastly, prosecutors don’t care what’s right, they only care about pushing their agenda and in the case of DA’s, getting re-elected.

shame, shame, shame of the state of Oklahoma for not having a process to finalize the inventory of any grower that does not renew the license.

As far as the actual shooting, the story isn’t clear if the suspect was actually in the building or still outside.
If this guy and his lawyer want to use the “stand your ground” law, then it’s a perfect example of a situation that someone was shot when they did not have to be. Regardless of whether or not he had a right to be where he was at the time, had he chosen to retreat, he would not be on trial for murder.

Forgot to add:
Shame on Yahoo “news” for making this about race.

Yes. Exactly. And all of us here might have different opinions on marijuana use, but that’s a distinct issue from whether his shots were fired in self-defense or 1st degree murder. It’s a quirk in Oklahoma law, apparently, but generally speaking, doing one bad thing A doesn’t mean that thing B is automatically wrong, as well.

We all know, for example, that someone can physically assault me, but if they stop and walk away I can’t draw my firearm and shoot them. It would make me a murderer, because the threat is over. In other words, the crime they just committed doesn’t mean they deserve to die. Similarly, the crime Mr. Bratcher may have committed with his marijuana business doesn’t mean he has to stand there and allow someone to invade his establishment and (potentially) threaten his life.

There are a lot of details we don’t have in this article. Perhaps Mr. Bratcher committed murder, I don’t know. I’m just wary of the 2A community shrugging off a self-defense case because we find potentially unrelated faults in the defendant’s character.

Can you legally drive without a valid license and auto insurance? Case closed - this reminds me of a line from Forrest Gump - buena suerte, senor.

Can you legally drive without a valid license and auto insurance?

Wow! I missed that part…I cannot believe how anti-military the US has become😳. But not really surprised😔. It starts from the top down through leadership in our current volatile society.

Interesting case. I have been concerned about legalizing weed and gun use and the laws.

Could a meth dealer legitimately defend himself with a gun if a user tried to steal meth?

WTF does race have to do with it? I think the news agency is going for clickbait headlines.

Well, actually you can drive without a license and registration.

Not meaning to nitpick, but if you are on your own property, you are not required to have either. On private property, like a parking lot, traffic laws do not apply. That does not mean that civil liability for a collision would not attach, but that’s it.

If not, then stay on the other side of the door, and call the police for a trespasser.

So after reading the story for the third time and no mention that Hardwick had a weapon? Just asking.

It’s a quirk in Oklahoma law

Most, if not all, state laws make it a felony murder charge to commit homicide during the commission of a felony, regardless of the prosecutor’s agenda. It becomes their choice to pursue the charges, though.

Perhaps Mr. Bratcher committed murder, I don’t know. I’m just wary of the 2A community shrugging off a self-defense case because we find potentially unrelated faults in the defendant’s character.

I do not fault his character. It is an issue with our laws, not his character. Yes, everyone should have the right to self-defense, but that is the nature of our firearm laws, which our Constitution succinctly states “shall not be infringed”.

no mention that Hardwick had a weapon

You can be beat to death without a weapon. We all know here that whether or not a perp has a “weapon” is not the issue. As you stated the “facts” in the article are to few to make any sound judgment.

Could a meth dealer legitimately defend himself with a gun if a user tried to steal meth?

Not according to most state laws. If one is committing a felony crime, the law prohibits self-defense as a defense for the use of lethal force.