The video says it was birdshot, ASP is pretty solid for delivering info when they have it and not just making stuff up. They will usually parse info from related news articles, etc.

I used her as an example because, she is the exact opposite of a “determined attacker”. She was 100% not paying attention, just minding her own business when BLAM gets hit with a chest full of birdshot (details from the video) at what appear to be less than 10ft. She didn’t immediately fall over or run away. As such, I’m going to assume someone who is motivated to do me harm can also continue to function for at least a good while before blood loss kicks in.

Yes, it’s true that there are many other calibers that are also not “one shot stops”, but those are all in calibers I don’t mind shooting in rapid succession (9mm, 5.56, etc). If I’m going to use a shotgun, and accept all the recoil and limited ammo capacity that comes with it, I want effectively one-stop shots. I’m pretty confident 00buck or a slug can provide as close to that as possible. Birdshot not so much.

But I also 100% agree with you that Birdshot is a great choice if you are concerned with wall penetration and absolutely need to limit that, at the expense of lethality. These are decisions we all have to work through in choosing our defensive ammo. 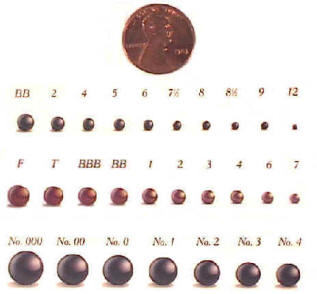 Here are the shot sizes. Choose wisely. If you’re defending your home against the unwelcome, you’ll want to make sure that you’ve tested what you’re using. Paper targets only tell a small part of the story…

Here are the shot sizes. Choose wisely. If you’re defending your home against the unwelcome, you’ll want to make sure that you’ve tested what you’re using. Paper targets only tell a small part of the story…

I would personally never recommend or ever use it. The pellets are too light (1 grain) and are traveling too slowly (1200 FPS) to maintain enough energy to penetrate the human skeleton past 15 feet. And the loads separate quickly to be able to hit a bird or a critter with a pellet or two while in motion. In my opinion it’s just not safe or smart to use for self defense.

What kind of load do you use for home defense? I like Federal 00 buck with the flight control wads.

I use Federal 00 as well

with the flight control wads.

Tell me about that?

I would worry about bird shot not providing enough penatration. Especially when the aggressor is wearing thick winter clothing and/or leather. Still, it would be better than nothing.

@James probably can speak better to it, but it’s a specially designed wad that helps keep the buckshot in a tighter group over longer distances. There are a good number of reviews on it, this video has neat slo-mo

EDIT: Actually found this video from LuckyGunner which compared several other brands at various distances.

@Harvey did a good job explaining it, the wad doesn’t open up as soon as other wads in other buckshot loads. Here is how Federal with the flight control wads perform in my shotgun.

I will say that if you decide to use a shotgun for home defense you need to pattern it to make sure you find a load that is adequate for your specific shotgun. 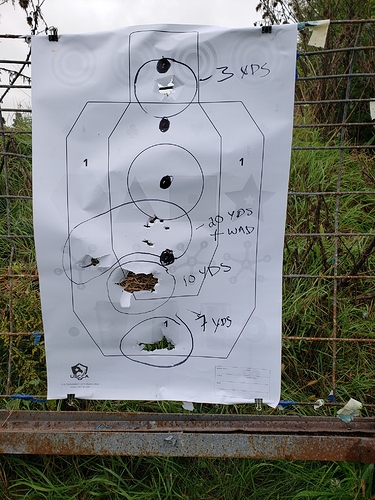 I did a little informal testing of a few types of 00 Buckshot. One was FliteControl Let’s just say I prefer 00 Buckshot, but if I can get it, I have 00 Buckshot FliteControl in my shotguns. It was a noticeably tighter pattern.

I would never consider it… Bird shot is for… Birds.
Humans are “about” deer sized, hence “buckshot”
Or slugs🥴
The sound and flash is going to be a huge if not sole reason for the fear. Sure FIBS, but the sound would be great if there was a civilian flash bang or similar. Drop it and cover your eyes and ears

Zee I know I am late to the party on this thread. I have used both flavors of Federal flight control wad in my training. If you are using a pump (specifically not an auto) you may consider using the reduced recoil version that Federal offers. It is much lighter on the shoulder and it leaves a cylinder bore barrel at around 1130 ft a second (18-20 inch). The regular recoil version of flight control is 1300 ft a second. They refer to that version as full power. Either would drop a “bad guy” in his tracks at home defense range. These shells are designed for LE shotguns and those are cylinder bore (no choke). The flight control wad passes smoothly along the bore and holds the shot together for alot longer during flight. At 30 ft in my HD Mossy I can always cover the shot easily with my fist. You always want to aim a shotgun, but with flight control wad it is especially important. Its almost like you are shooting a rifle “tactically” at < 30 feet. Both versions of this shell are easy to get online. If you try them you will never want to defend your life with another type 12 ga shell.

Y’all have sold me on rounding some flight control up for a test shoot!

Actually the big hole will be the entry would, then the large wound channel and tissue damage, and ‘birdshot’ will generally not penetrate the backside. WildRose is correct there will be several hundred pellets to remove. I used to recommend to anyone that would listen that they use 7 1/2 shot. Now after some research into reality and ballistics, i recommend #4 shot. it won’t generally shoot through, but carries more inertia, force, than birdshot. Heavy slugs are usually a no-no for home defense, unless you are willing to penetrate walls even if you hit your target. Modern Sabots are probably also a good choice if using ,a rifled barrel.

Numerous patterning demonstrations you can find on YouTube and elsewhere show 12 ga 00 loads [.33 cal balls] in cyl choke will spread approx 1" for every yard of distance. Nearly the same with most other gauges above .410. #4-6’s can spread 2x that. #8’s can spread 3x that. A tighter choke helps tighten the patterns. That is why you pattern shotguns at 40 yds [long range for most people], to see how many pellets remain within the 30" kill zone circle. Thus, for home defense at typically expected 5yd or less ‘target’ distance, you MUST aim, not just point in the general direction, to actually reliably effectively center hit your target with a 15" birdshot pattern, or 5" 00 pattern.

My CCW instructor suggested #4 buck shot for home. Watching ballistics tests it seems to work well and don’t have to worry about it going through the assailant and through the wall behind them.

Unless the pellets are in a area of the body that will cause a issue down the road the doc wont remove all the pellets. That would be too time consuming. So the bad guy may have to live with the fact he/she will be setting off metal detectors for the rest of their time on earth.

Paul Harrells ‘target’ was shot at 5 yards and did a very credible job with bird shot.
But that was at 5 yards and was with 3" Magnums. the lesser loads were much less effective.
Fair enough.
With the current ammo shortage it’s good to have options!