Be careful out there. Minneapolis going nuclear again 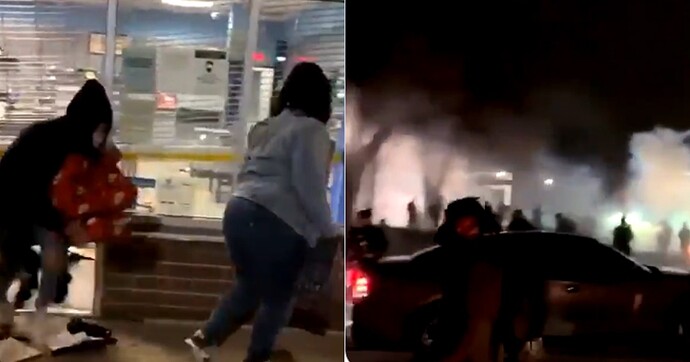 Bring on the summer of love 2021, midwest location. Gonna be chaos all summer.

I don’t understand the looting, and why they are not prosecuted. This should have been shut down years ago.

I don’t understand the looting, and why they are not prosecuted.

Not enough trained social workers to do crowd control!

Unreal, I feel sorry for the law-abiding citizens in these areas. Fortunately, I have been spared around my neighborhood, but areas of Richmond, VA, are still not back to normal.

While city fathers remain dumb and pro-criminal, and pay homage to “social justice”, the city will smolder and normal people’s lives will be poisoned by misery.

When we incentivize breaking the law…

Apparently, the officer that shot the perp thought she was deploying her Taser. This is what defunded policing looks like. Training requires funding.

I feel bad the officer grabbed her firearm vs. the taser she thought she was grabbing, however, this was an easily avoidable incident.

From what I saw on my local news he was pulled over for expired registration, easily avoidable. Secondly, he resisted arrest for an outstanding warrant, maybe the warrant was a mistake, but the bigger mistake was resisting arrest, again, easily avoidable.

My take away- if the Police think they need to arrest me, let them arrest me and sort it out later.

Accidentally grabbing her gun? Prison time in her future. Police mistakes like that deserve harsh punishment. The military would crucify a soldier making that mistake. Why should police be excused. No doubt the deceased person should have complied. Knowing how many LEO think it’s too risky to think they’re competent enough not to screw up.

I wonder if our soon to be president will help bail out any of the peaceful looters, if any were arrested?

No matter what the outcome of the Chauvin trial–conviction, acquittal, mistrial, hung jury-- Minneapolis is going to burn. (Just a personal observation.)
I’m afraid that summer will be riot season again this year all over the country, with or without an excuse.

I’m afraid that summer will be riot season again

Makes me wonder about the whole idea of making police officers carry tasers. If they did not, they would never confuse the two. The sympathies here will be with the person who was resisting arrest - another crime in itself. However, the focus will be on punishing the police who have been handicapped in doing their jobs. Overall, the rule of law is broken and national sympathies seem to reward criminal behavior and praise those who commit crimes as if they are innocent because of an unjust society.

The officer in question is a 20 yr veteran. Defunding is not at fault for this particular incident. Training failure, sure. But after 2 decades on the force I would put my money on complacency…
After only 4 months in Iraq it was hard to break our unit routines. 60x that length of time makes said routines second nature.

I think I read she is a 26 (edited to correct years)year police officer. No excuse. You can’t let officers off the hook even in situations like this. I feel really bad for her. She’s up the creek for sure. Manslaughter.

Accidentally grabbing her gun? Prison time in her future.

I don’t know all the details. I haven’t watched all the videos. But in our taser training, we were warned about this. You’ll notice a lot of officers carry their taser the opposite (often their ‘weak’ side) their sidearm.

This officer is in for a rough go. First, how did she mistake her firearm for a taser? Was it lack of training? Failure to comply with department standards? Panic?

Second, why would she try to fire a taser into a vehicle?

I suspect a lot of officers are in for some updated training. I hope there will be some lessons for us who carry if/when this is all sorted out.

It’s a shame all the way around as I see it but, from my personal experience with cops in a big city (Chicago ), and others up north. I have experience many cops using the stop resisting line just to use violence even there is no resistance present. I truly hope this is not the case but from what I have seen it truly appears to be. I try not to be hard on LEO’s but when your experience with them from a child to an adult is bad, one judge cops hard.

when your experience with them from a child to an adult is bad, one judge cops hard.

This creates a self fulfilling prophecy. The LEO can’t permit his subject to struggle. Struggling is resistance, Fear brings on resistance, and the beat goes on. Someone needs to dial it back on both sides. The so called media & race baiters just fan the flames.

Not to mention that there are bad actors on both sides of the subject!