I am looking for input on what to do if, in a situation like the Boulder, CO shooting
You are in the store and the shooter has created panic and control with an AR.
All you have is your CC 9mm.
.

Perhaps, this contains the answer for you 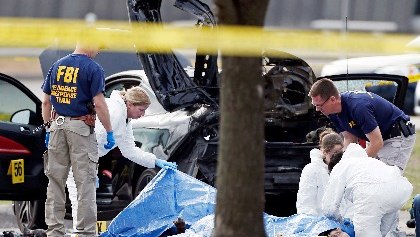 withdrawn due to bad press reports.

I don’t think caliber is much of a factor here. A rifle is more precise over a longer range, than a pistol. Doesn’t make 9mm any less deadly. Also, if they are shooting a rifle, they are likely to wear armor. Given all this, If you can target the mass shooter effectively, you should engage, this is the best chance of survival for you and other people.
If you can’t/unsure, then get out of his range quickly. That’s 2nd best chance.
You can hide, but nothing much in a grocery store provides cover (i.e., impenetrable surfaces).

Pistol vs rifle is not an auto-win for the long gun. An AR is a better tool, but it is still just a tool. You are the weapon.

We typically do not seek a confrontation. If one can safely get away, that is often the best tactic. If you need to defend, then you need to try to find cover, or, at minimum, concealment. I, personally, would not attempt a shot over 25 yards with a handgun in a crowded store. In close a handgun is more maneuverable and the power difference basically irrelevant. Find angles of attack that can make your handgun at least as effective as the rifle. If you have to fight, the best fight is an unfair fight where you have the advantage.

It all comes down to not adding to the Panic. People are most dangerous when they are scared. in this situation only fire if you have to or have a clear shot that would not hit a bystander.

It all comes down to not adding to the Panic

Welcome to the community @RVA_DAR I think your point is well taken. Pick your shot carefully. This is not a suicide mission or guilt trip!

Well, since you can choose you’re caliber I would feel much better with a 10mm 1911.

This is one of those very slippery questions that can be taken out of context on many sides.

Member A: I’d take a shot if I had one!
Member B: I’d only shoot if confronted.
Member C: I’d charge the SOB and close the distance for better results!
Member D: I’m covering my escape and getting out!

I’ve said it here before. There is NO WAY to know how you will react to stressful situation XYZ, RIGHT NOW!! I have seen multi tour, verified badass, combat vets freeze and not quite 18 y/o’s dance across the battle space spitting out death and destruction like they were watering flowers.

Tough situation. It really depends on what you carry and your skill with it. I consider myself to be a very good shot after 21 years in law enforcement and over a decade in USPSA. With that said, multiple factors would play into my decisions of which the most prominent is the location and safety of my family. Family with me = escape with family, ensure their safety. That is any parent’s first obligation. If escape isn’t possible and a gunfight is imminent I’m moving to the best cover I can and fighting to better cover or escape. While an AR is only a tool it is a significant advantage in a gunfight that the average shooter will have little ability to overcome. AR ammo quantity, penetration, and 3 points of contact will make it far superior to any CCW gun. If no cover, no escape, then rapidly close distance while firing controlled shots.

This type of situation is why the phrase “bring enough gun” comes to mind. I am not talking 9mm vs .45 cal vs 50BMG. I’m talking micro-compact, sub-compact, compact, and full size. I own and carry a Glock 43. While I really like it, it only carries 7 rounds. 7 rounds can be shot through very quickly in a gunfight. So even with a reload I only have 13 rounds. Additionally, the short barrel means less distance for accurate engagement, so closing the distance would need to be considered. I also own and carry a Glock 48 as my regular carry. Now I have 11 rounds in the gun, and 21 with a reload. Additionally, the barrel is longer so accuracy at a distance is improved. Maybe, with the bigger gun, I open the distance to gain cover. I also own, and occasionally carry, a Glock 17. So now I have 18 rounds initially, 35 with a reload and again a longer barrel. My options just improved a bit. I remember an article interviewing an officer who engaged an active shooter in a mall, I think in Nebraska. The officer was armed with a .38 revolver and made the statement that once he engaged the shooter he became painfully aware of his ammo deficiency.

I think Crag6 is right. Until you are in a gun battle you don’t know how you will react. I have a personal “priority of life” list that I use for me. Essentially, rank the priority of lives around you from highest to lowest.
1. Wife/kids
2. My life
3. Victims/bystanders
4. Suspect

John,
Thanks for the professional advice. Very well constructed.
I also will carry a G43 with a Pierce plus 1. However, I prefer my G19 Gen5.
Be well and be safe.

I’d use whatever it is I happen to be carrying.
If I’d use it depends on the circumstances.
I’d avoid a fight if at all possible and report the details observed to responding LEOs
If I were in the line of the BG’s fire, I’d hope my initial response would be to find cover for myself and others first.
But you never know.

My suspicion is that many BG’s would be a little put off when they weren’t expecting return fire.
The Boulder King Sooper shooter responded by taking off his clothes and surrendering after being shot in the leg
Of course, if meth is involved, all bets are off.

Honestly don’t know what I would do. But if I were in the target zone my training says return fire. I am not saying that is the best course of action only what I think of when I am training.

I have watched the White Settlement Church video several times and that is what I most often envision when thinking of these shooting where I am not in the position to flee. Remember the shooter has to defend against 360 degrees of potential attack. When the shooter changes their focus it would be time to take action if you have decided to attack or escape.

If you have decided to return fire be sure you are in range. Acquire the target and shoot when ready. Trust your training. That is what made the Texas Church shooting successful. It could still have gone south but it is the very reason we take training classes isn’t it.

Some do it as an exercise and it isn’t always as we have planned. But try to remember what you have learned about cover versus concealment. Most of us will never face such a decision and I pray none of you do. But just as an opinion and nothing more, train as if you will. I just believe if I am shot at I carry so I can shoot back.

Amen to that! Posing hypotheticals makes for tricky problem solving. You train, you practice, you think, and when something happens you react. How you react depends on your preparation and the situation from your perspective.

Unlike Parkland ex-deputy Peterson, I’m not a law enforcement officer.

My own survival might mean not even engaging the bad guy.