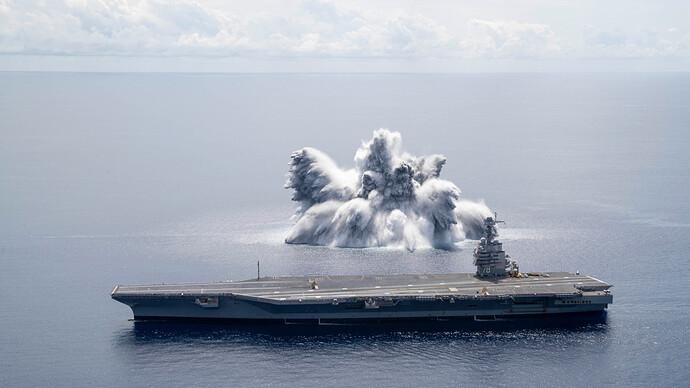 The game warden gets mad at me when I go fishing the same way. Puts a whole new dimension to “under way replenishment”. Fresh fish for everybody tonight!!

Are those all the same bomb? Interesting how the scale (ship vs explosion) changes so dramatically based on the camera angle.

I know why the US Navy does this, but I like to think there’s a redneck somewhere in the admiralty that was asked “What should we do with our new $16 Billion ship?” “Let’s blow 'er up!!!”

BTW, slightly related trivia. The term “bullet-proof” used to be a literal term. If you look at some of the armor on old tanks, like the Renault FT, you can usually find a divot where it had been hit with a around. The armor was literally “proofed” with a bullet to make sure it could withstand a hit. So the USS Gerald Ford wasn’t directly hit, this is kind of the same concept. Except instead of a bullet, it’s a big, big bomb.

Pardon me for saying it but I have to correct you. This is not a big big bomb. This is a MF big ass bomb.

You might have missed the implications in the article. But it caused a 3.9 earthquake 100 miles away in Florida. It must have been done in the Atlantic. Also, it must have wreaked havoc on the aquatic life. I wonder how many creatures died from the experiment? Kind of concerning to me. Was it really necessary? I like to blow sh!t up like the next guy but surely this is a bit overboard (pun intended).

If you measure in kilotonnes, 20Kt is pretty timid as nukes go. Why are they testing realistic effects of nuclear strikes lile this? Is this normal, or do they expect unusual activity.

Is this normal, or do they expect unusual activity.

I’ve read that it’s fairly normal. They’re still running the USS Ford through her paces, and she’s the first of her class. They are studying her to find out what she- and her successors- can and can’t take. It’s a huge investment and they don’t want to lose her because they didn’t know what would happen if a bomb dropped near her. If there’s a problem with mechanics, electronics, or sea-worthiness, it’s better to find out now that when she’s full of Sailors and engaged with an enemy.

Probably not the kind. This is the kind an actual enemy would use for EMP

Learn About Starfish Prime, the Biggest Nuclear Test in Space

Learn about the Starfish Prime nuclear test, the largest nuclear test in space. Get the history and find out about the test's electromagnetic pulse (EMP).

I think this is very closely related to Operation Crossroads. I read about it long time ago. It was the end of Prinz Eugen, the last surviving Bismarck class “pocket battleship”. It was struck by 23Kt underwater detonation and eventually capsized and sank.